The August 27, 2012 Edition of RAW is a Professional wrestling television show of the WWE's RAW brand, which took place on August 27, 2012 at BMO Harris Bradly Center in Milwaukee, Wisconsin.

Not content with just beating Jerry “The King” Lawler in a RAWactive Steel Cage Match, WWE Champion CM Punk battered the WWE Hall of Famer senseless after the bout for refusing to call him “The Best in the World.” The carnage only ended when John Cena charged to ringside and demanded the cage be lifted. In three weeks at Night of Champions, Punk and Cena will tangle one-on-one to determine who really is best. Also, Triple H questioned whether we've seen the last of him inside the squared circle.

Raw kicked off with Jerry “The King” Lawler demanding an apology from WWE Champion CM Punk, who kicked the Hall of Famer in the head on last week's show. But instead of a sincere apology, Lawler received a string of insults from Punk, who still holds a grudge after Lawler's claims on Raw 1,000 that Punk turned his back on the WWE Universe. After the bitter words — which included Punk calling into question Lawler's manhood — Punk suggested they fight, leaving the decision for Lawler to think about it, which he agreed to do.

Two streaks continued on the final Raw in August. Ryback racked up another win, while Jack Swagger failed to win a singles match — a trend that unfortunately has continued since January. In the brutal contest, The All-American American didn't stand a chance against the larger and more brutal opponent.

At the start of the Divas match, Vickie Guerrero interrupted and tried to get in a few words, but it would have to wait until after Divas Champion Layla beat Natalya. As soon as the match was over, Vickie stood in the center of the ring and claimed Raw General Manager AJ Lee was out of bounds by asking Dolph Ziggler to put his Money in the Bank contract on the line against Chris Jericho. She went on to beg the WWE Board of Directors to put her in charge, claiming AJ is childish. Not wishing to hear any of Vickie's criticisms, the GM headed to the ring to slap and attack Vickie, driving her from the ring.

After CM Punk tweeted that he'd give Jerry Lawler the first punch if they met in a match, Lawler responded by addressing the entire WWE Universe in attendance and around the world. After rattling off his formidable opponents from back in the day, the WWE Hall of Famer vehemently agreed to face Punk. “I know I’m not the best in the world, but I don’t think you are either. … I’ve never backed down from a challenge in my life and I’m not about to start. … You're damn right I’ll fight you tonight.”

Asserting her control as Raw General Manager, AJ Lee sent Daniel Bryan to anger management class. The WWE Universe got a glimpse of how the former champion handled himself in his sessions with a series of exclusive videos. During the classes, Bryan grew frustrated while Kane opened up and spoke bluntly about his dark, twisted past.

As former United States Champion Santino Marella battled Heath Slater, the lovely Aksana made an appearance at the top of the entrance ramp just when Santino was poised to strike with The Cobra. Although momentarily distracted, Santino managed to strike with his vicious finisher to send Slater spiraling to the canvas.

After a high-flying move from Sin Cara took out Damien Sandow on the outside of the ring, the 350-plus-pound Brodus Clay got some air of his own and crushed Cody Rhodes into the canvas for the win. To celebrate the victory, The Funkadactyls, members of the WWE Universe and even Sin Cara all danced together in the ring.

The warning signals were there from the start, when Daniel Bryan had to compose himself as the WWE Universe started calling him “goat face” before the match could get going. But when R-Truth led fans in chanting “Yes! Yes! Yes!” Bryan got caught up in chanting “No! No! No!” The distraction caused Bryan to lose the match by count-out. Afterward, he flipped his lid and the steel ring steps.

While taking a brutally honest look at himself in front of the WWE Universe, Triple H admitted: “Brock Lesnar has made me ask the question: Am I done?”

As The Game talked about what it has meant to him to compete for fans, he admitted he is unsure if he will compete again. “Time is the one thing you cannot fight. Time will win,” he said.

After revealing he never wanted to be the guy who just hung around past his time, he said, “Hopefully in some way, you’ll never forget me. Thank you.”

When Ricardo Rodriguez slid Dolph Ziggler's Money in the Bank briefcase into the ring, Ziggler grabbed hold of it. Next, The Viper struck quickly, dropping Ziggler with a backbreaker. The World Heavyweight Champion followed up with a blistering Brogue Kick for the win for his team in a bout featuring some of WWE's most fierce competitors.

With Kane sitting silent at the announce table in place of Josh Mathews (FULL STORY), The Big Red Monster watched Zack Ryder take on David Otunga. After Ryder scored the win, The Devil's Favorite Demon charged into the ring and grabbed hold of Ryder. Apparently having second thoughts, Kane released Ryder from his clutches. However, Otunga wasn't so lucky and was the recipient of a vicious Chokeslam.

In a match decided by a RAWactive vote, WWE Champion CM Punk goaded Jerry Lawler into hitting him first to stat their bout. When the WWE Hall of Famer took him up on his offer, he sent the stunned champion reeling. After the shock wore off, Punk mounted a dominating and punishing offense against Lawler.

At one point, Lawler struck Punk down and went for an escape from the cage. But the champion dragged him back to the center of the ring to exact more punishment. Next, Lawler battled back, shoving Punk face first into the stinging steel cage, then delivered a series of blows finished off with a clothesline and more punches. Then, after Lawler climbed to the second rope, he blasted Punk with a fist drop.

As the battle waged on, Punk put an end to the war by making Lawler submit to the Anaconda Vise. But Punk wasn't done yet.

After the win, Punk grabbed a lock and chain from under the ring and locked himself inside the steel cage with his downed opponent. With Lawler in his clutches and a microphone shoved in his face, Punk demanded Lawler call him the best in the world. When the WWE Hall of Famer remained defiant, Punk repeatedly pummeled him.

With Lawler in severe pain, John Cena rushed to ringside and called for the cage to be lifted. Despite Cena's presence, Punk continued reigning down more blows on Lawler. When the cage finally lifted, Punk quickly exited, while Cena and WWE officials rushed in, coming to Lawler's aid. 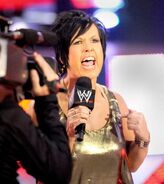 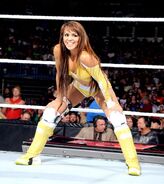 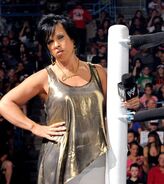 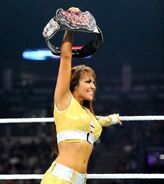 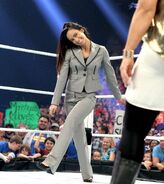 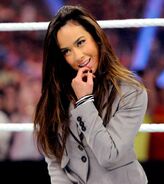 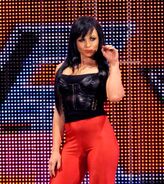 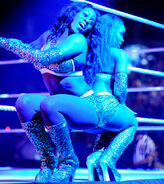 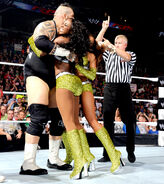 Retrieved from "https://prowrestling.fandom.com/wiki/August_27,_2012_Monday_Night_RAW_results?oldid=1551891"
Community content is available under CC-BY-SA unless otherwise noted.