The August 26, 2011 Edition of Smackdown is a Professional wrestling television show of the WWE's Smackdown brand, which took place on August 23, 2011 at the Scotiabank Saddledome in Calgary, Alberta.

With General Manager Theodore Long unable to attend SmackDown due to unforeseen circumstances, COO Triple H called on Calgary’s own WWE Hall of Famer Bret Hart to serve as the Special Guest General Manager. However, when Christian showed up with a court order stating that no Superstar would get a World Title match until he was granted his rematch – including the new No. 1 contender Mark Henry – The Excellence of Execution decided to act. As a result, Christian will face World Heavyweight Champion Randy Orton in a Steel Cage Match for the World Heavyweight Title on the live SuperSmackDown this Tuesday in Wichita, Kan.

Feeling cheated, an irate Henry emerged, demanding to face the winner of the Steel Cage Match. But, before that issue could be resolved, Sheamus once again came forth to block his play.

In a high-octane match made by Special Guest GM Bret Hart, Mr. Money in the Bank Daniel Bryan took on former World Heavyweight Champion Christian. But, moments after struggling to find his way to the ropes to escape the LeBell Lock, Christian avoided Bryan’s charge – causing his determined opponent to launch his body into the corner with tremendous velocity. Christian quickly hit the Killswitch for the victory, giving himself momentum heading into his World Title Steel Cage Match on SuperSmackDown live this Tuesday at 8/7 CT on Syfy.

Making it clear that he felt personally insulted about having to face the local athlete standing before him, Wade Barrett put down his microphone and walked out of the ring without further comment. For more on Barrett’s overwhelming sense of entitlement.

Just four days before he will face WWE Champion Alberto Del Rio on SuperSmackDown, the mystifying Sin Cara took on Heath Slater. Utilizing an incredible athletic combination off the ring ropes, the masked Superstar pinned The One Man Southern Rock Band – continuing his gravity-defying romp over the SmackDown locker room.

As Cody Rhodes accompanied Ted DiBiase to the ring for his match with former Legacy cohort World Heavyweight Champion Randy Orton, the bitter Superstar professed the “miracles,” he claimed he had preformed. These included the resurrection of the Intercontinental Title and the very career of DiBiase himself. But, despite his “words of wisdom” and a hard-fought effort by DiBaise, The Viper would ultimately strike last, avoiding Dream Street to hit his prey with the RKO.

After the bell – embarrassed by the loss – Ted’s own “life coach” blasted his friend with the Cross Rhodes. He then dished out additional humiliation, placing another bag on his head.

Utilizing a slew of maneuvers that the “Divas of Doom” Beth Phoenix and Natalya have been speaking out against for weeks – including the stink face and a playful slap on the backside –Kelly Kelly finished off Tamina with the K-2 legdrop. Before the match, Natalya had made it clear to the WWE Universe that she “doesn’t play with dolls.” So, in spite of her triumph, is it only a matter of time before the D.O.D. shakes up the “cutesy” Divas Champion?

Battling back from the infamous Khali Vise Grip, Ezekiel Jackson powered his way to the ropes, forcing The Punjabi Nightmare to break his excruciating hold. Moments later, while an interfering Jinder Mahal was attacking Jackson, The Great Khali accidently knocked him off the apron. The Personification of Domination then defied logic itself, lifted his gigantic adversary up into the Torture Rack, making Khali tap out!

In an epic SummerSlam rematch, Sheamus and Mark Henry picked up right where they left off, going blow for blow in an all-out vicious main event. However, when the smoke cleared, it was ultimately The World’s Strongest Man who could not answer the count. After their fierce brawl spread outside the ring, The Celtic Warrior blasted his adversary with a Brogue Kick so impactful that it sent the massive Superstar over the announce table, rendering him unable to beat the referee’s 10-count back into the ring.

Though the bell signaled a victory for Sheamus, it could not contain the continued fury between the two intense grapplers. And once Henry gained the upper hand, he unleashed the full scope of his wrath, sending his Irish foe crashing down onto the unforgiving steel steps with the World’s Strongest Slam. 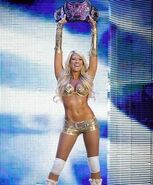 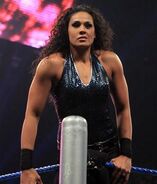 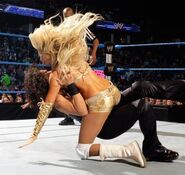 Retrieved from "https://prowrestling.fandom.com/wiki/August_26,_2011_Smackdown_results?oldid=985881"
Community content is available under CC-BY-SA unless otherwise noted.