The August 24, 2016 Edition of NXT is a Professional wrestling television show of the WWE, which took place at the Barclays Center in Brooklyn, New York on August 20, 2016 before NXT TakeOver: Back to Brooklyn went live.

Wesley Blake's continued quest to prove he can make it on his own without Buddy Murphy hit another stumbling block. Blake nearly triumphed over Tye Dillinger behind an aggressive attack, but would ultimately fall to his perfect opponent.

Feeding off an amped-up crowd in Brooklyn, The Perfect 10 fought back en route to delivering his Tye Breaker finishing maneuver for the victory.

The Authors of Pain — who we finally learned are called Akam & Rezer — and TM61 are quickly becoming intense rivals, as they brawled before the bell could even ring in this matchup. Despite WWE Hall of Famer Paul Ellering's monsters starting the pre-match fracas, it was Shane Thorne & Nick Miller who ended it by sending the bruisers from the ring before taking them down with crowd-pleasing dives over the top rope.

Once the bell finally sounded, the Australian duo of Thorne & Miller continued to take the fight to their larger foes, hitting them with a barrage of impactful strikes. Despite the impressive offensive display, Akam & Rezer proved to be too powerful, withstanding the attack to distribute their own destructive assault for the win. 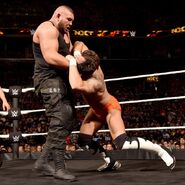 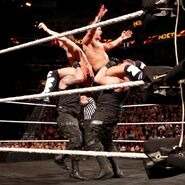 Retrieved from "https://prowrestling.fandom.com/wiki/August_24,_2016_NXT_results?oldid=1551885"
Community content is available under CC-BY-SA unless otherwise noted.