Well, so much for the conga line.

No Way Jose had the Brooklyn crowd hyped up to start this week's NXT, to the point where a few lucky members of the NXT Universe joined him for a pre-match dance outside the ring. Unfortunately, Lars Sullivan wasn't a fan of the performance as he stormed down the entrance ramp, barreling over the fun-loving Superstar.

The monstrous Sullivan continued to lay waste to Jose as NXT fans looked on in horror. After slamming Jose face-first into the mat, Sullivan stomped out of the ring, leaving Jose to be attended to by WWE officials.

Later in the evening, exclusive footage from WWE.com revealed what seemed to spark Sullivan's anger. The temperamental Sullivan was backstage performing an interview when Jose's entrance music distracted him to the point of fury.

Peyton Royce picked up the victory over Mae Young Classic competitor Sarah Logan, but it wasn't without a fight.

It didn't take long for the Kentucky native to gain the support of the Brooklyn crowd as she unleashed a spirited attack against Royce.

However, Billie Kay managed to insert herself into the contest when she grabbed onto Royce to try and prevent Logan from hitting a potential belly-to-back suplex. The tenacious Logan ended up rolling up Royce anyway, but after kicking out, Royce hit her opponent with a knee to face and a fisherman suplex for the victory.

All four competitors put on a show as they had the NXT Universe in Brooklyn roaring in approval thanks to their jaw-dropping in-ring display.

The turning point in this back-and-forth classic came when Wolfgang shrewdly tagged himself into the contest. Bate – not realizing that Wolfgang was now the legal man – hit his Tyler Driver ’97 on Dunne. However, just as the first-ever WWE United Kingdom Champion was realizing Dunne was not the legal man, the 250-plus pound Wolfgang nailed a huge Swanton Bomb from the top rope, resulting in a victory. 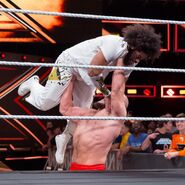 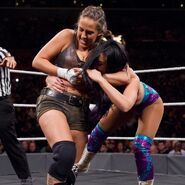 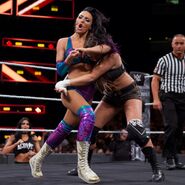