The August 22, 2016 Edition of RAW is a Professional wrestling television show of the WWE's RAW brand, which took place on August 22, 2016 at Barclays Center in Brooklyn, New York. This was the RAW after SummerSlam.

The Demon King has abdicated the throne.

Less than 24 hours after defeating Seth Rollins to become the first-ever WWE Universal Champion at SummerSlam, Finn Bálor was forced to relinquish the title to Raw General Manager Mick Foley and Commissioner Stephanie McMahon, having suffered a right shoulder injury at The Architect's hands during their historic clash. Unfortunately, Rollins cut Bálor's hope for a clean exit short and wasted no time in attempting to cobble together a case for him to inherit the now vacant championship.

The Architect certainly had company in that regard.Sami Zayn, Chris Jericho and Kevin Owens were quick to name themselves as worthy of a title opportunity, as did Roman Reigns and, surprisingly, Enzo Amore & Big Cass. Foley provided the solution, sanctioning four qualifying bouts for a match next week to determine a new Universal Champion. First up? Rollins and Zayn, and The Architect kicked things off in underhanded fashion, cheap-shotting Zayn while he was busy staring down Owens.

Give Seth Rollins this much: He does not let disappointment keep him down for long. The Architect stayed firmly in the running for the WWE Universal Championship by denying one of his would-be usurpers, Sami Zayn, in a singles match. The win landed Rollins a spot in a Fatal 4-Way for the title next week on Raw.

It was, ironically, a landing that cost Zayn the match — specifically, a bad one off a springboard that tweaked his ankle and gave Rollins an opening. Even a one-legged Zayn was surprisingly difficult pickings for The Architect (a sit-out, sunset flip powerbomb nearly ended the match), though having the Helluva Kick taken from him proved to be a handicap Zayn couldn't surpass. A Pedigree spelled the end of a bout that was much closer than Rollins is likely willing to admit.

He owes Chris Jericho a big hug for lending a hand, though. The Man That Gravity Forgot was running roughshod over KO in the early openings until “Jeri” came to “KO’s” aid, allowing Owens to land a barbaric clothesline on his foe. Jericho interfered again when Neville set up for the Red Arrow, and this time it helped Owens secure the win, as he tripped his opponent up on the turnbuckle and quickly administered a spinning torture rack neckbreaker to earn the win.

The past few weeks have been a roller-coaster for Big E. First, the WWE Tag Team Champion suffers a debilitating case of ringpostitis, only to return at the moment of truth and save his fellow New Day members (and Jon Stewart) from the hands of diabolical doctors Luke Gallows & Karl Anderson. Now, the big man is back in earnest, defeateding Anderson in a singles match that's both his first bit of in-ring action in almost a month and the one-year anniversary of New Day's reign as WWE World Tag Team Champions.

All in all, the good brothers’ insistence that they're owed a title match on the back of last night's disqualification ruling might not be without merit. But clearly, having New Day at full force changes the complexion of any such match, as they were able to neutralize an interfering Gallows before Big E scooped up a mid-sprint Anderson into the Big Ending.

One year ago, The Prime Time Players’ improbable run to the WWE Tag Team Championships was cut short by The New Day, and Titus O’Neil would like you to know he’s still completely fine with it, thank you very much. In fact, he explained, that loss was what motivated him to jettison Darren Young and strike out on his own, and his recent matches with the rebuilding Mr. No Days Off have only served to remind him he made the right choice.

The Big Deal then called out his former partner to “bury” him once and for all, only he got D. Young's life coach Bob Backlund instead. Mr. Backlund attempted to throw hands with O’Neil over Darren's protests and was beaten down in response. So was Young when he came to Backlund's aid, suffering a Clash of the Titus from the self-proclaimed only Prime Time Player.

This right here? This is Big Cass, and he ... he beat Rusev? For what it's worth, upending The Super Athlete is something that certainly can't be taught, and the Queens-born seven-footer did just that, earning a major upset over the U.S. Champion to place himself in the running for the WWE Universal Title.

To be fair to The Bulgarian Brute, he started the bout behind the 8-ball, as the beating he took from Roman Reigns at SummerSlam left him with bruised ribs and less-than-full mobility. But Cass delivered an impressive performance all the same, one that kicked into high gear when Rusev kicked Enzo in the head on the outside. From there, Big Cass was off to the races, hammering away on Rusev's torso and forcing the U.S. Champion to throw up his hands and leave rather than take any more punishment.

It's ... BAYLEY!!!!! Two nights after an emotional NXT Women's Championship Match against Asuka, the fourth Horsewoman of WWE NXT finally arrived on Raw as General Manager Mick Foley’s newest signing. She wasted no time in filling the void left by her injured BFF, Sasha Banks, either, defeateding Dana Brooke to position herself in the running for Charlotte’s WWE Women's Championship while The Boss recuperates and waits for a rematch promised by The Hardcore Legend.

For what it's worth, Sasha will have her work cut out for her when she returns. Bayley proved her status as the hottest female free agent in the game by cannily outsmarting Brooke's power-based offense, ultimately powering her into the corner, landing a spinning elbow off the top rope and finally executing a Bayley-to-Belly Suplex to win. Congrats, Bayley. It's not a moment too soon. With both Sasha and Bálor injured, we could all use a hug right about now.

Well, Braun Strowman’s back, which means some unlucky local competitor is about to get demolished. This one, a Brooklyn product, was amazingly, and appropriately, named Johnny Knockout. Appropriately, that is, because Strowman didn’t just pin him, he defeated him twice, forcing the referee to count a second pinfall after he’d already defeated him with the reverse chokeslam.

After a whirlwind return to WWE, The Dudley Boyz are saying goodbye. And what better way for them to spend their retirement than ... a trip to Puerto Rico? Yes, you have surmised correctly: The Shining Stars, of all people, were the ones who interrupted Bubba Ray & D-Von’s swan song to deliver a parting gift of a pair of economy class plane tickets to Puerto Rico.

There have been worse presents, truth be told, but the interruption was disrespectful enough that the Dudleys revoked their no tables edict and went to put Primo & Epico through the pine. Alas, they were denied even that, as Luke Gallows & Karl Anderson jumped the ECW Originals from behind, laying Bubba Ray out and putting D-Von through his own table with a Magic Killer.

It would appear that Chris Jericho is not gonna get it. It, of course, is referring to the WWE Universal Championship. Roman Reigns might just get it, however, having given it to Jericho in Raw’s main event to earn a spot in next week’s historic Fatal 4-Way WWE Universal Championship Match. Reigns took quite a beating before he was able to give one back, including a thumb to the eye that kept the former WWE World Champion on his heels for a good portion of the match.

With Jericho in the driver’s seat, Reigns had to work twice as hard to dig himself out of the proverbial hole. He encountered another obstacle when Kevin Owens came to Jericho’s aid and started throwing superkicks in Reigns’ direction. Unfortunately, miscommunication and a late rally from Reigns earned Owens a Superman Punch, at which point Jericho got it — or in this case, a Spear. 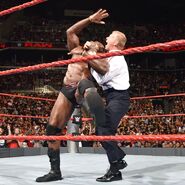 Retrieved from "https://prowrestling.fandom.com/wiki/August_22,_2016_Monday_Night_RAW_results?oldid=1583859"
Community content is available under CC-BY-SA unless otherwise noted.