The , 2017 Edition of RAW is a Professional wrestling television show of the WWE's RAW brand, which took place on , 2017 at the Barclays Center in Brooklyn, New York.

The Beast Incarnate managed to stave off The Gift of Destruction (and Roman Reigns and Samoa Joe) despite being put through two tables and buried under a third by Strowman at SummerSlam, but The Monster Among Men made it quite clear that the Universal Champion wasn't out of the woods yet in Raw's opening moments.

After Lesnar and Paul Heyman sufficiently crowed over the successful title defense, Strowman emerged and obliterated The Beast Incarnate without speaking a single word, preferring to let a pair of bone-jarring Running Powerslams and a pose with the Universal Title do all the talking necessary. Fittingly enough given the announcement later in the night, you could almost say he showed no mercy.

Enzo Amore, who may well have more heart than sense, challenged Big Cass to a third singles match under Brooklyn Street Fight rules and once again felt the brunt of his old partner's power. But Muscles Marinara stumbled into the win nonetheless when the seven-footer went to put the match away and ended up injuring himself, injuring his knee after he missed with a big boot and tumbled over the ropes.

Cass still rallied to set Enzo up for the Empire Elbow, but his knee gave way as he attempted the move, leading the referee to call the match off and award the victory to Amore.

Chalk this week up to a learning experience for Emma, who grumbled about Nia Jax stealing her opportunities backstage within earshot of the imposing Superstar and was “given a chance,” as it were, to back up her words. It did not end well.

Emma, to her credit, knew she was somewhat doomed from the jump, so she slapped Jax in the face and threw hands instantly. Unfortunately for her, the opposition was too strong. While Jax didn't quite brutalize her foe to the point of "#GiveEmmaCPR" as she promised during their confrontation backstage, she quickly put Emma away with a brutal Samoan Drop nonetheless.

Raw General Manager Kurt Angle had been promising to bring a big-name Superstar to Raw all day long. Well, he's here, his name is John Cena and someone is not happy about it.

The Cenation Leader revealed his return to Raw was both a perk of his free agent status and part of his desire to seek out Roman Reigns, who he's circled in Fatal 4-Ways and Twitter spats, but never one-on-one in the ring. Alas, before they could throw down in the fight Cena was hungry for, The Miz crashed the party and openly demanded to know why Cena and Reigns received all the marquee “moments” at the expense of the Intercontinental Champion.

When Miz essentially demanded a main-event moment, Cena floated the idea of himself and Reigns teaming up to challenge The Awesome One and whichever Miztourage member volunteered to be his partner. As it turned out, Samoa Joe stepped up to take the slot and assert his own dominance. The Samoan Submission Machine caught the 16-time World Champion with a surprise punch to ignite a melee, though Cena and Reigns briefly won the day when they sent Joe and Miz packing at the end of the ensuing brawl.

The Cruiserweight division is once again Neville's kingdom, but the WWE Cruiserweight Champion has no shortage of potential challengers to his throne. Eight of them squared off in an epic tag team contest on Raw, and two on the victorious team — Gran Metalik and Cedric Alexander — made the strongest impression.

The former opened the contest against flight-averse Drew Gulak and helped Alexander seal the victory, taking Gulak out during an apron-clearing brawl, at which point Cedric defeated Tony Nese with the breath-taking Lumbar Check that sent The Premier Athlete careening into the air before crash-landing on the canvas. Despite that display, Neville seemed unconcerned about the security of his reign during a post-match interview. But when Akira Tozawa invoked his rematch clause for 205 Live tomorrow, his tune quickly changed.

The band is back together, and the dream matches have already begun. Dean Ambrose & Seth Rollins opened their unlikely Raw Tag Team Title reign by declaring the evening to be a “party” and inviting any team in the locker room to step to them, seemingly expecting Cesaro & Sheamus to come looking for a rematch. Instead, they got a gentleman's challenge from The Hardy Boyz, and it was exactly as epic as you might have imagined. (Cesaro & Sheamus scouted from the locker room.)

The Most Exhilarating Tag Team In History didn't just hang with the younger tandem, they came awfully close to defeating the new champions after Matt Hardy hit The Lunatic Fringe with the Twist of Fate to tee him up for Jeff Hardy's Swanton Bomb. However, Rollins superkicked Matt right after Jeff tagged in, and Ambrose got his knees up to block the Swanton, leaving The Charismatic Enigma alone to suffer the one-two combo of Rollins’ ripcord knee and a match-ending Dirty Deeds.

The Brooklyn curse is broken, and Sasha Banks is once again Raw Women's Champion. But she shouldn't get too comfortable just yet: Alexa Bliss was quick to confront The Boss, invoking her rematch clause for next week's Raw even though Banks invited her to throw down then and there.

Despite the way she lost the title at SummerSlam, Bliss perhaps has a reason to be optimistic about the potential encounter: While she does boast three previous reigns as Raw Women's Champion, Sasha has never successfully defended the title. In other words, there may yet be one hex left for The Boss to break.

So Jason Jordan wants competition. Finn Bálor, to be precise. And even though the gold-blooded Superstar came up short in the match he asked his father and Raw General Manager Kurt Angle to grant, it was still one of the most high-profile showcases of Jordan's abilities to date.

If nothing else, Jordan proved he can not only survive, but thrive on Team Red, countering Bálor's striking and high-flying with amateur-style wizardry that grew more and more intense as the match raged on. He even managed to land one charge into the corner, but Finn thwarted the Angle Slam-neckbreaker combo and reclaimed the advantage. When Jordan again went to set up the sequence after charging Bálor all around the ring, the Irishman countered and nailed the chest-caving Coup de Grâce to seal the victory.

03:51 The Miz got his main event moment, though likely not the one he expected, as The A-Lister suffered the deciding pinfall in Raw's main-event tag team match that pitted the Intercontinental Champion & Samoa Joe against the strange, uneasy alliance of John Cena & Roman Reigns.

The Cenation Leader and The Big Dog never quite entirely got on the same page in the bout, though to be fair, Miz & Joe were struggling as well. The WWE Universe's incessant chanting got in The Awesome One's head early and often, nearly nullifying the pre-match strategy Joe had so intimidatingly laid out.

Despite the crowd noise, The Samoan Submission Machine was all business, cutting off a Five-Knuckle Shuffle attempt on The A-Lister and kicking off a brawl that nearly allowed Miz to claim the win after Reigns, who was seemingly aiming for Joe, accidentally Superman Punched Cena while he was trapped in the Coquina Clutch. But Miz took too long to set up his own Skull-Crushing Finale and was planted with a match-ending Attitude Adjustment for his troubles.

Cena and Reigns didn't seem much excited by their win, sharing a tension-filled moment in the ring wherein Reigns visibly said “my bad” for hitting Cena with the punch. By his partner's look, it seemed like the apology would, for this time, at least, 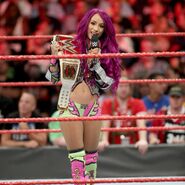 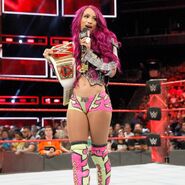 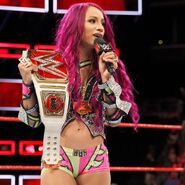 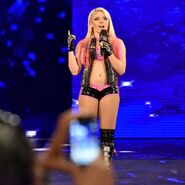 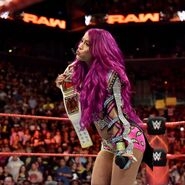 Retrieved from "https://prowrestling.fandom.com/wiki/August_21,_2017_Monday_Night_RAW_results?oldid=1551754"
Community content is available under CC-BY-SA unless otherwise noted.