August 9, 2017
The August 2, 2017 Edition of NXT is a Professional wrestling television show of the WWE, which took place at the Full Sail University in Winter Park, Florida on July 12, 2017.

Johnny Wrestling is back. Competing on WWE Network for the first time since Tommaso Ciampa attacked him at TakeOver: Chicago, Johnny Gargano took on dynamic luchador Raul Mendoza. The world-traveled Mendoza came prepared, using his silky-smooth technique to put Gargano on his heels at various points in the match.

Yet, Johnny Wrestling would not be deterred in his first match back on NXT. After Mendoza miscalculated a high-flying move off the top rope, the beloved Gargano caught his opponent in his crossface specialty known as the Gargano Escape to pick up the submission win.

If NXT Women's Champion Asuka wasn't yet taking the challenge of Ember Moon seriously, she should be now.

Three weeks away from their title match at TakeOver: Brooklyn III, Moon confronted The Empress of Tomorrow after Asuka reiterated nobody is ready for her — including Moon. Asuka faked out Moon with a handshake before slapping her, roundhouse-kicking her in the cranium and throwing her to the floor. Moon sprang back into the fight, however, scaling the ropes and nailing Asuka with the Eclipse to leave the champion down and out for the first time in her storied NXT career.

With the NXT Women's Title within reach, Moon appeared tempted to pick up the prize, but ultimately resisted, telling NXT fans that she would hold the championship when she earns it. Will Aug. 19 be the day?

As seems to be the pattern nowadays, it didn't take long for NXT Champion Bobby Roode to say something incendiary during a brief backstage interview.

Though The Glorious One's proposal to meet Drew McIntyre face-to-face next week ahead of their showdown at Takeover: Brooklyn III was more newsworthy than controversial, his swipe at Roderick Strong — claiming to be a “better man” than The Messiah of the Backbreaker — was the handiwork of a master instigator.

No sooner than Roode unclipped his lavalier microphone did Strong storm the set, only to be held back by other Superstars. NXT General Manager William Regal tried to intervene and calm down Strong, but Regal's admission that his hands are tied and that Roode's dance card is full did little to comfort Strong.

The red-hot Sonya Deville isn't slowing down. The former MMA fighter faced powerhouse Jenna Van Bemel, and despite an obvious strength disadvantage, Deville picked apart her opponent. She expertly dodged her opponent's attack and jarred Van Bemel's insides with a series of knees and kicks. It didn't take Deville long to leap onto the bigger Van Bemel and take her down in a triangle armbar out of nowhere, forcing the bruiser to tap out and continuing Deville's streak of victories in NXT.

But before their epic encounter got underway, Black had another Superstar to deal with: Hideo Itami. Itami had commandeered the ring to decry what he believed to be a lack of respect toward him. As Black entered the ring for his scheduled match, Itami initially conceded the squared circle but then tried to jump Black from behind, only to be laid out with Black Mass.

With Itami accounted for, at least for the time being, Black reset his focus on O’Reilly. It's a good thing, too, as O’Reilly was ready to make an immediate impact. He displayed his remarkable grappling skill from the outset, grinding the almost impervious Black into the canvas.

As the match progressed, the feeling-out process gave way to heavy blows and near-submissions. Black stomped O’Reilly with big boots and wicked hits, and O’Reilly fought back with a boa-constrictor-tight front chancery and venomous axe kicks. O’Reilly scored with a big leaping knee strike, too, but Black's unshakable poise allowed him to remain in the game, and he suddenly swatted O’Reilly with a stunning Black Mass for the three-count.

O’Reilly might have lost in his NXT debut, but following the remarkable contest, neither the NXT faithful, nor Black, will soon forget it. 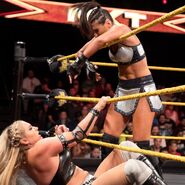 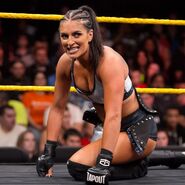 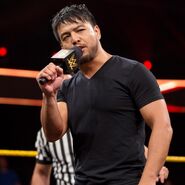 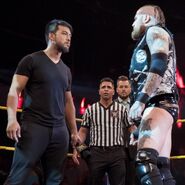 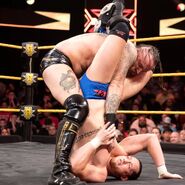