August 26, 2021
The August 19, 2021 Edition of Impact was a Professional wrestling television show of Impact Wrestling. It was taped in Skyway Studios in Nashville, Tennessee.

The show opened with Josh Matthews and Gia Miller in the ring, reminding everyone that Christian Cage won the Impact World Championship, but they were interrupted by a brawl between Eddie Edwards and W. Morrisey. Sami Callihan arrived to help Eddie come out on top, though he wasn't too pleased about it.

Sami then demanded for the first match of the show to start: him & Chris Sabin vs. Ace Austin (with Madman Fulton) & Moose. Sabin got a blind tag on Sami and hit the Cradle Shock on Ace to get the win, but then ate a piledriver from his partner.

The Good Brothers (Doc Gallows & Karl Anderson) and Sami Callihan both cut backstage promos discussing their upcoming matches, with the latter getting interrupted by Eddie Edwards. The next match then took place, where Shera (with Rohit Raju) faced Matt Cardona (with Chelsea Green). Cardona won with a Radio Silence off the second rope.

There was an episode of Madison Rayne & Johnny Swinger's talk show, Locker Room Talk, with guests Tenille Dashwood & Kaleb with a K. Josh Alexander then gave an interview, which got interrupted by Jake Something. Jake walked to Scott D'Amore, who was arguing with Kaleb with a K, to ask for an opponent, and Scott decided to book the two in a no DQ match.

Christian Cage walked to the Impact ring for the first time in 9 years and announced that the TNA World Heavyweight Championship was officially retired. Brian Myers & Sam Beale walked out to mock him and then attempted an attack, but was fought off by Christian.

Melina had a quick chat with Trey Miguel backstage before her match against Brandi Lauren, which she won by submission with the California Dream. Deonna Purrazzo & Matthew Rehwoldt attacked the winner of the match, and Trey rushed to the ring to help her fight them off.

John Skyler was giving an interview when the camera panned to David Finlay tending to Juice Robinson, injured from a mysterious attack.

The no DQ match between Jake Something and Kaleb with a K was next. Jake quickly won with a spear through a table, and Josh Alexander then walked to the ring to confront him. After that was a creepy vignette featuring Su Yung & Kimber Lee, where they held a strand of Kiera Hogan's hair.

The main event was a match between Joe Doering, with the rest of Violent By Design, and Doc Gallows, with Karl Anderson. Gallows hit a Gallows Pole through the stage, and the match nearly ended in No Contest, but both were able to recover and get back in the ring. Doering hit a lariat to win. 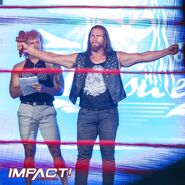