Moon, having recently confirmed that her Eclipse can drop the unbeaten Empress of Tomorrow, vowed to end Asuka's historic title reign and undefeated streak this Saturday. In response, Asuka, in uncharacteristic fashion, lost her composure entirely, angrily shouting at Moon in Japanese and holding the title high above her head.

Will Moon bring a close to Asuka's reign of dominance? Or will the threat that she poses merely cause the champion to unshackle her most dangerous instincts?

Much like their NXT debut last week, The Street Profits’ sophomore outing, against the mighty Lars Sullivan and an enthusiastic Chris Silvio, was in the bag — thanks, in part, to a cardinal mistake committed by Silvio. Against the wishes of his massive teammate — a man with a history of thrashing underperforming partners but who promised William Regal he wouldn't do so tonight (at least not in the ring) — Silvio insisted on starting the match first.

He rushed into battle before Sullivan could stop him, only to be immediately slugged by an awaiting Angelo Dawkins. The Street Profits proceeded to run through Silvio. They prevented him from ever tagging in the behemoth Sullivan and ultimately finished him off after a combination Dawkins spinebuster and Montez Ford frog splash.

Though he was again let down by a tag team partner, Sullivan came through on his promise to not dismantle his partner in the middle of the ring. Instead, he slung Silvio over his shoulder, carried him out of the arena and brutalized him outdoors before stuffing him into a trash can.

Ruby Riot had a personal score to settle with Billie Kay after Kay and Peyton Royce mocked Riot's tattoos and ear piercings last week behind her back. The aggrieved Riot fired into action and, after a series of rapid-fire pint attempts that caught Kay flat-footed, gave her opponent a taste of her own medicine, taking a moment to poke fun at The Iconic Duo's patented manner of finger-pointing.

Kay shot back, slamming Riot and trying to wear her down with a submission move before Riot broke free and dropkicked the Australian Superstar. Riot followed up with Deadly Nightshade in the corner and a wind-up Pele kick for the win.

Even though Riot was victorious, Royce grabbed a microphone and called Riot a “gross, tattered loser,” saying she would never be “iconic” like Royce and Kay.

Seventy-two hours before challenging NXT Champion Bobby Roode at TakeOver: Brooklyn III, Drew McIntyre entered the ring for battle against Roderick Strong. Neither Superstar displayed any personal animosity toward each other — rather, both men have their sights set on The Glorious One, albeit for distinct reasons. McIntyre is hungry for the NXT Title and to return the yellow-and-black brand back to the people, whereas Strong is more than fed up with the crude remarks that Roode has made about his family.

Strong's vendetta against Roode even factored into this match, as per a pre-match stipulation, a victory against McIntyre would have ensured Strong a future bout with Roode, post-TakeOver.

With that backdrop, McIntyre and Strong roared into action. McIntyre launched Roddy with an overhead throw and a vicious lariat, and Strong lit up the Scot's chest with chops and booted him in the mush. Late in the match, McIntyre approached for his Claymore kick, but Strong beat him to the punch, hitting a leaping knee and then capturing his larger opponent in vertebrae-smashing backbreaker. Somehow, the undefeated McIntyre persevered.

Both Superstars eventually fought their way onto the top turnbuckle, and while they were tangled in the corner, Roode pounced on the opportunity to send a message to his two chief rivals. The Glorious One jumped onto the apron and shoved Strong off the top and to the floor, causing The Messiah of the Backbreaker to take a brutal tumble. Inside the ring, he stomped McIntyre and planted him with the Glorious DDT.

Keeping a tight grasp on the NXT Title, Roode admired his handiwork, blew a kiss to the fallen Strong and then stood over his challenger at TakeOver, McIntyre, and yelled, "This is my NXT!" 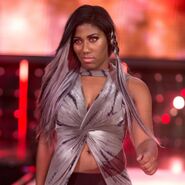 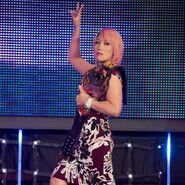 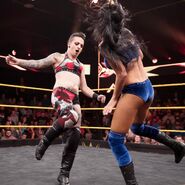 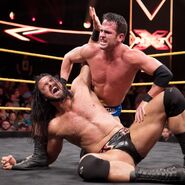