The August 16, 2004 Edition of RAW is a Professional wrestling television show of the WWE's RAW brand, which took place on August 16, 2004 at the John Labatt Centre in London, Ontario, Canada.

What Evolution gives, it takes away.

With new World Heavyweight Champion Randy Orton seconds from tapping to the Crippler Crossface, Evolution descended upon the ring. Their presence forced Chris Benoit to break his hold and fend off the dangerous trio, allowing the Legend Killer to connect with a match-ending RKO.

It appeared that Triple H had fulfilled his pre-match promise that “Evolution is (Orton’s) solution.” The faction celebrated their victory in the ring — the young champion poised atop Batista's broad shoulders. Triple H gazed up with a grin, giving Orton the thumbs up. Then, to Orton's surprise and horror, it became a thumbs down.

Evolution's animal promptly dropped Orton on his back, and the onslaught that followed included a Batista Bomb and bloody Pedigree. It was painfully clear that Orton's SummerSlam triumph had done nothing to slow The Game's march toward regaining “what’s his,” namely the World Heavyweight Championship.

The turn of events overshadowed a crisp, sharp, focused performance by Benoit in a contract-clause championship rematch. An angry, ferocious Rabid Wolverine took the action to Orton early, hitting a Superplex and cinching in the Sharpshooter. But Evolution's Monday Night RAW plans proved overwhelming for Benoit and Orton both.

Earlier, Edge carved out an Intercontinental Championship defense against Kane before returning a favor to Chris Jericho. With Y2J suffering a double-team at the hands of Batista and Ric Flair, Edge made his way to the ring. He was seemingly going to even the odds on behalf of Jericho, but he instead chose to leave. It's just what happened to him when Jericho had the same saving opportunity prior to SummerSlam.

Kane's loss — in part because of the interference of Lita — couldn't come close to dampening the spirits of the groom-to-be. The Big Red Monster instead stayed happily focused on their wedding for the week after, which would take place live on RAW.

Things also heated up in the $250,000 Diva Search competition. Diva Dodgeball star Michelle McCool got eliminated, and the other hopefuls ripped into Carmella, saying in independent segments that she should be the next girl voted out.

And in the first match made for Unforgiven, the team of Rhyno and Tajiri got a World Tag Team Championship shot against La Resistance. 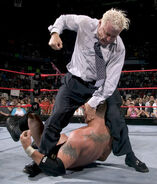 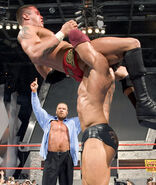 Retrieved from "https://prowrestling.fandom.com/wiki/August_16,_2004_Monday_Night_RAW_results?oldid=1583008"
Community content is available under CC-BY-SA unless otherwise noted.