Kurt Angle came out to the ring as RAW exploded live from Providence, RI! The American Hero told the sell-out crowd that, even though Rhode Island was the insignificant, nothing state, much like Triple H. Angle then went on to compare Triple H to Tonya Harding, saying that the Game had not one iota of integrity. Kurt also said he has also figured out why Triple H has not liked Kurt since he had entered the World Wrestling Federation - jealousy! Angle called Hunter bitter and jealous and said that it pained him to see his friend Stephanie to be saddled with a loser like him! Immediately, Triple H ran to the ring to confront Angle, but Shane McMahon ran out to break up the fight. Shane told the two that it was because of their bickering that Stephanie was attacked by The Rock. Shane told Hunter that Kurt would never try to break up his marriage, and he told Kurt that Stephanie would not marry a loser. Then, Shane told the two that they needed to focus their energy on The Rock and SummerSlam. As he was about to finish, Shane was interrupted by Mick Foley! 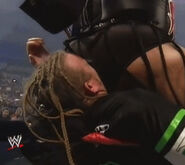 Retrieved from "https://prowrestling.fandom.com/wiki/August_14,_2000_Monday_Night_RAW_results?oldid=1240317"
Community content is available under CC-BY-SA unless otherwise noted.