August 19, 2011
The August 12, 2011 Edition of Smackdown is a Professional wrestling television show of the WWE's Smackdown brand, which took place on August 9, 2011 at the Power Balance Pavilion in Sacramento, California.

Gearing up to serve as the Special Guest Referee in the blockbuster SummerSlam main event to decide the Undisputed WWE Champion, WWE's Chief Operating Officer Triple H journeyed to SmackDown. Pledging to continue to make WWE exciting and unpredictable, he announced a slew of explosive SmackDown match-ups for later in the show.

Christian then emerged to inform Triple H that putting him in a career-threatening No Holds Barred Match at SummerSlam against the “mentally unstable” Randy Orton was creating an unsafe work environment for him. He threatened that if WWE's COO didn't remove that stipulation from the World Title showdown, he was going sue WWE and just about everybody else associated with the event. But, when Triple H threatened to fire him for breach of contract and take back the World Title, Christian opted to drop the lawsuit. He pledged instead to defeat Randy Orton at SummerSlam and whomever Triple H puts him in a match with tonight. That Superstar ... would be Sheamus.

Sensing that he was in real jeopardy of losing a match just two days before he will attempt to defend his title against Randy Orton at SummerSlam, the slippery Christian thrust Sheamus’ neck over the top rope, temporarily taking down the only Irish-born former WWE Champion. The World Heavyweight Champion quickly grabbed the World Title and high-tailed it up the ramp, forcing the referee to count him out.

Beth Phoenix and Natalya punished Kaitlyn and A.J. from the opening bell, with The Fabulous Firebird quickly finishing off the “spitfire” A.J. with the devastating Glam Slam. After the match, the self-proclaimed “Divas of Doom” continued the attack on their fallen opponents, leading Natalya to lock Kaitlyn in the Sharpshooter as The Glamazon enjoyed her screams.

Can Divas Champion Kelly Kelly withstand the divine dominance of Beth Phoenix this Sunday as SummerSlam?

Reemerging sooner than medical experts indicated he might, the gravity-defying Sin Cara leaped back onto the scene with increased muscle and a fresh arsenal of maneuvers. Utilizing incredible athletic prowess, the high-flyer triumphed over Tyson Kid.

For the first time ever, the current holders of the Raw and SmackDown Money in the Bank briefcases squared-off against each other. And in the pinnacle of the high-stakes encounter, Bryan missed his mark off the top rope, allowing Del Rio to lock in the cross armbreaker for the win.

After numerous head butts with his protective face mask and a key distraction by his associate Ted DiBiase, Cody Rhodes executed a fierce springboard kick on Ezekiel Jackson. The bitter Superstar then finished off his decorated opponent with the Cross Rhodes, pinning his shoulders to the canvas to become the new Intercontinental Champion.

With the newly acquired title firmly in his grasp, Rhodes instructed DiBiase to put a bag on the head of his fallen predecessor. But, when The Personification of Domination awoke, Cody made a quick exit, leaving the oblivious DiBiase to take the brunt of his wrath.

Johnny Curtis – winner of WWE NXT season four – was decimated by Mark Henry in his debut match – in an all-out slaughter that culminated with the World's Strongest Slam. But, as the irate Henry looked to continue his attack after the bell, Sheamus charged to the ring after him. Not wanting to wait for their impending showdown at SummerSlam, The Celtic Warrior challenged his enraged foe to fight him right then and there. Instead, Henry chose to make his own statement of force, hitting a second World's Strongest Slam on Curtis outside the ring.

In a classic story of David and Goliath, Randy Orton locked horns with The Great Khali. And in the end, The Viper hurled his metaphoric stone at The Punjabi Nightmare – in the form of a debilitating RKO – covering the gigantic Superstar for the victory.

Immediately following the match, World Heavyweight Champion Christian interrupted the celebration to taunt his No. 1 contender with some information he said he just received. Whatever the mysterious information was, he proclaimed that “it was going to change everything” at SummerSlam, Christian claimed he can't wait for their No Holds Barred Match – where “anything goes.” With a smile, he added that “I have the best thing going.”

What does Christian have up his sleeve come this Sunday at SummerSlam? 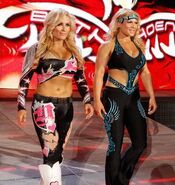 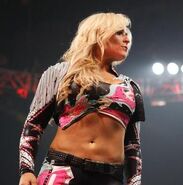 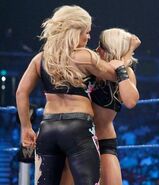 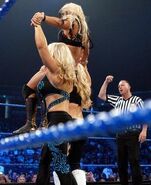 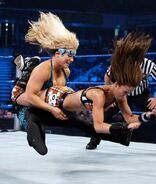 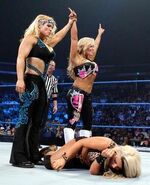 Retrieved from "https://prowrestling.fandom.com/wiki/August_12,_2011_Smackdown_results?oldid=1551685"
Community content is available under CC-BY-SA unless otherwise noted.