The NXT Women's Championship Match at TakeOver: Brooklyn II, between reigning champion Asuka and her challenger, Bayley, was made official in an emotional and intense contract signing. Both competitors signed on the dotted line, but not until after a heated exchange that included the challenger shunning the titleholder's sign of respect.

Bayley's refusal to extend her hand riled up the usually calm Asuka, but The Empress of Tomorrow regained her composure amid a tense staredown with the No. 1 contender. The contract signing, although absent of physicality beyond a shoulder bump from Bayley to Asuka, proved to be rife with mind games. In the end, Asuka made the final statement by raising her title up high in the face of her determined rival.

The Authors of Pain continued to destroy their opposition after soundly defeateding Rob Kimball and Adrian Nails. Once it became clear that the Authors planned on continuing their assault well after the bell, TM61 rushed the ring to try and cut off the potentially devastating post-match attack.

Unfortunately for the well-intentioned Shane Thorne & Nick Miller, they were no match for the behemoths standing before them. As WWE Hall of Famer Paul Ellering watched, the black-clad monsters brutally disposed of the talented Australian tag team.

Roode proceeded to inform Almas that General Manager William Regal made a match at TakeOver: Brooklyn II on Saturday, Aug. 20, between the two of them that will help make an already stacked show glorious.

Liv Morgan showed off an exceptional set of moves, but she could not overcome the red-hot Billie Kay. The New Jersey native employed a fast-paced attack, but in the end, a vicious big boot from Kay proved to be the difference maker in yet another impressive victory for the former basketball player.

After learning from Regal that they will challenge The Revival for the NXT Tag Team Championship at TakeOver: Brooklyn II, Johnny Gargano & Tommaso Ciampa took on up-and-coming competitors Tucker Knight & Patrick Clark.

The talented tag team appeared to be as united as ever after their hellacious battle in the first round of the Cruiserweight Classic, swarming their opponents with an impactful offensive arsenal en route to victory. 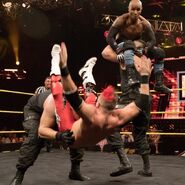 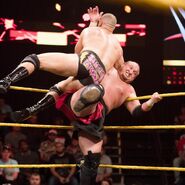