August 17, 2010
The August 10, 2010 Edition of NXT is a Professional wrestling television show of the WWE, which took place at the HP Pavilion in San Jose, California.

Throughout season two, the NXT Rookies have been tested on their physical, verbal and mental skills. In the latest NXT Rookie Challenge – the Power Punch – the final six competitors’ punching power was sized up.

Each NXT Rookie had one punch at the boxing machine, and the competitor with the highest score – Alex Riley – won the Challenge. As the winner, the Varsity Villain gets the prestige and spotlight of appearing on Raw next week!

The final six NXT Rookies faced off in a Tag Team Rematch of their bout on the previous night's Raw. While Husky Harris earned yet another win against Kaval on Raw, he wasn't so lucky on WWE NXT this time. Kaval earned a win for his team after pinning Michael McGillicutty. But was this tag team victory enough for the winners to impress the WWE Pros and secure their safety in this week's NXT Poll?

The topic of the week around the WWE locker room seems to be the unsteadiness of Team WWE before their 7-on-7 Tag Team Elimination Match against The Nexus this Sunday at SummerSlam. United States Champion The Miz boasted to fellow WWE Pro, John Morrison, that John Cena and Bret “Hit Man” Hart practically begged him to join Team WWE on Raw. But The Shaman of Sexy told Mr. Money in the Bank he didn't want his former tag team partner to join, and challenged him to a match on WWE NXT.

Once again, The Miz proved his awesomeness, defeating Team WWE's Morrison with a devastating Skull-Crushing Finale just five days before SummerSlam. Will The Miz join Team WWE and make an impact on the 7-on-7 Elimination Match this Sunday on pay-per-view? Or will Morrison and his teammates fight their own battle against The Nexus?

With excitement at an all-time high, the votes from the WWE Universe and the WWE Pros were combined, and the results of the latest NXT Poll were revealed. With a No. 6 ranking, Lucky Cannon was the latest NXT Rookie eliminated from the competition.

There's just three weeks left until the season two finale of WWE NXT! The winning NXT Rookie will earn a title match against the champion of his choice at a future WWE pay-per-view.

After 10 weeks of competition, another NXT Rookie's dreams of becoming WWE's next breakout star have been shattered. The results of the latest NXT Poll were revealed live, and Lucky Cannon has been eliminated from WWE NXT. 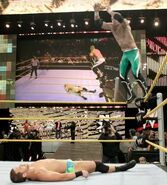 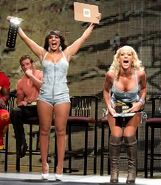