The April 7, 2006 Edition of Smackdown is a Professional wrestling television show of the WWE's Smackdown brand, which took take place on April 4, 2006 at the Peoria Civic Center in Peoria, Illinois.

As the road to WrestleMania 23 begins, it was a night of firsts as Friday Night SmackDown emanated from Peoria, Ill.

On SmackDown, Rey Mysterio made his first-ever defense of the World Heavyweight Championship against Randy Orton. Leading up to the match, several moments were shown highlighting Rey's path to the top. As Orton stood backstage stretching, he was approached by Kurt Angle. After telling Angle that he would help him find the World Heavyweight Championship, the Legend Killer was surprised when the Wrestling Machine slapped him twice across the face.

In the match itself, Rey took control early, using an uncharacteristic mat attack to ground Orton. Rey then sent Orton to the floor, where he hit a seated senton onto the challenger. Back in the ring, Rey got a two count, but Orton took control with a backbreaker shortly after. For the remainder of the match, the Legend Killer cockily pounded his smaller opponent, thwarting all of the champion's comeback attempts. At one point, Mysterio tried to springboard off the apron, but an Orton dropkick sent him crashing to the floor. However, Rey managed to kick Orton coming off the top rope, and the champion was able to regain control. After hitting another seated senton, Mysterio hit a modified reverse DDT and went to the top rope, but got caught coming down with a dropkick. Randy then set up for the RKO, but Mysterio avoided it with a spin kick. After Orton charged into the steel post, Mysterio hit a pair of 619s and then Dropped Da Dime on the Legend Killer to pick up the victory. After the bout, Kristal caught up with Rey backstage, who said that he would keep proving the naysayers wrong as he shared the moment with his family.

SmackDown also saw the first appearance of a monstrous newcomer . Prior to his match with Undertaker, Mark Henry said that after passing out in the casket at WrestleMania, he saw a vision that Undertaker would suffer a similar fate. Throughout the match, it looked like a false vision, as the Deadman dominated Henry. At one point, the match spilled outside the ring, and Undertaker rammed Henry into the ring steps. As they brawled, Daivari led an unknown giant out to the ring. The man stood over 7-feet tall, and he stared down the Deadman. Undertaker got back into the ring to confront him, but his punches had no effect. Daivari's charge nailed the Deadman with a monstrous chop and laid Undertaker out with repeated headbutts to the back of his head. Undertaker was left lying beaten in the ring as everyone in the arena wondered who this new monster was.

In addition, Gunner Scott got his first SmackDown victory, upsetting Booker T. Prior to the match, Booker T showed Teddy Long a restraining order on the Boogeyman, preventing him from coming within 100 feet of Booker or Sharmell. Booker was all smiles as he headed to the ring for the match, but he seemingly underestimated Scott. The newcomer gave Booker a run for his money early in the match, but the former United States Champion soon took firm control. Just as Booker looked to finish Scott off, Boogeyman's music suddenly played in the arena. As Booker & Sharmell looked around confused, Scott used the distraction to his advantage, rolling up Booker to get the upset pinfall. Theodore Long then came out to apologize to Booker, but after he did, the General Manager reaffirmed that Scott was the winner of the match.

That wasn't Long's only announcement of the night. Before the main event, Long gathered Kurt Angle, Chris Benoit, Randy Orton, Booker T, Matt Hardy, Bobby Lashley and Finlay in the locker room, where he announced the return of the King of the Ring tournament. The tournament will start next week, and the first opening-round match will pit Kurt Angle against Randy Orton.

Chris Benoit may have some business to attend to next week as well, based on the activity after his match. After Benoit defeated Simon Dean, a video played highlighting great Americans of the past. It was soon learned that JBL was behind it, as his face was superimposed onto Mount Rushmore. The video hailed JBL as one of the greatest Americans in history, and said that next week there would be a celebration for JBL's United States Championship victory at WrestleMania 22.

Also on SmackDown, Paul London & Brian Kendrick made a statement by defeateding WWE Tag Team Champions MNM in a non-title match. Before the match began, London & Kendrick interrupted MNM's entrance, pulling Melina off the apron in the middle of her split. They then took the fight to MNM for several minutes before a referee distraction allowed Melina to trip Kendrick as he ran the ropes. The champions then proceeded to cut Kendrick off from his partner, dominating the match. Kendrick actually had Nitro defeated with a small package, but referee Jim Korderas was again distracted and MNM took control once again. Kendrick was also able to break free and tag London at one point, but again Korderas was distracted and he disallowed the tag. Finally, Kendrick escaped a double suplex attempt and tagged London, and the former Cruiserweight Champion cleaned house on MNM. London hit the dropsault for a two count, but his attack on Mercury was thwarted when Nitro dropped him neck-first on the ropes. MNM tried the Snapshot, but London was able to escape, and a brawl broke out. In the end, London was up on the top rope, but Melina pushed him off, and London appeared to injure his leg. Mercury then tried to follow up with a Boston crab, but London reversed it into a rollup to get the surprising pinfall.

Plus, Paul Burchill defeated William Regal once again. Before the match, Regal offered to call off the bout if Burchill agreed to stop dressing like a buccaneer. Burchill refused, but made Regal an offer: if Regal won the match, he would change his wardrobe; however, if Burchill won, Regal would have to dress as he saw fit. Regal agreed, and Burchill told him he would look good dressed as a buxom wench. It will soon be seen if that is true or not, as while Regal dominated the match, Burchill ended up victorious, pinning Regal following a backflip uranage slam. Regal was unhappy after the match, begging Burchill for reprieve, but the English scoundrel will now have to honor his word. 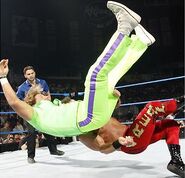 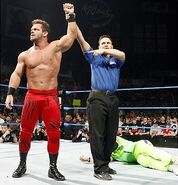 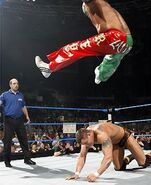 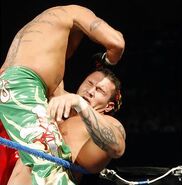 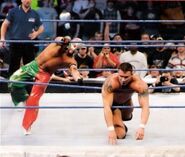 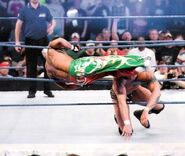 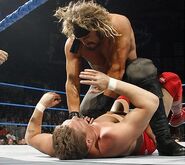 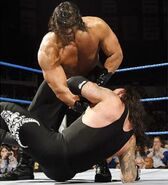 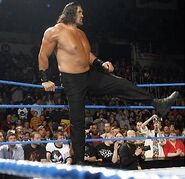 Retrieved from "https://prowrestling.fandom.com/wiki/April_7,_2006_Smackdown_results?oldid=1309553"
Community content is available under CC-BY-SA unless otherwise noted.