April 13, 2016
The April 6, 2016 Edition of NXT is a Professional wrestling television show of the WWE, which took place at the Kay Bailey Hutchison Convention Center in Dallas, Texas on April 1, 2016.

Plus, in the main event, “The Drifter” Elias Samson sought to silence Apollo Crews once and for all, while Crews looked to capitalize on the momentum from his huge Raw debut and send Samson drifting away.

Elias Samson quickly earned the ire of the NXT Universe, strumming away on his six-string and attempting to serenade the Lone Star State. However, neither the sold-out Dallas crowd nor Apollo Crews were prepared to let “The Drifter” croon.

Crews wanted nothing more than to get his hands on Samson, after the mysterious Superstar viciously attacked his good friend Johnny Gargano several weeks ago. The Drifter sought to slow Crews down early on, grabbing a tight headlock, but there was no keeping the red-hot Crews contained. The leader of the Apollo Nation slipped out of Samson's grasp and took hold of The Drifter's arm, keeping a tight grip on the guitarist, even as Samson tried to leave the ring.

The Drifter took control by sweeping Crews’ legs out from under him as the fiery upstart tried to pull off an aerial attack. Samson stayed on top of Crews, but with the NXT Universe firmly behind him, there was no stopping the four-tool Superstar. Samson connected with a series of punches that only lit a fire under Crews, who unleashed his fury on The Drifter, taking him out with a moonsault from the apron to the arena floor. Back in the ring, Crews continued his attack, staggering The Drifter with a big boot before finishing Samson off with his patented toss powerbomb to pick up the impressive victory. 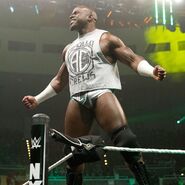 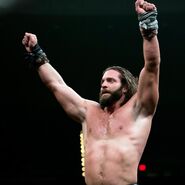 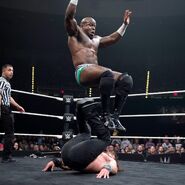 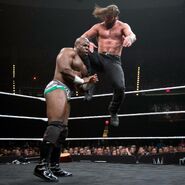