May 4, 2016
The April 27, 2016 Edition of NXT is a Professional wrestling television show of the WWE, which took place at the Kay Bailey Hutchison Convention Center in Dallas, Texas on April 2, 2016.

The NXT Universe was still reeling from last Thursday's shocking news that Samoa Joe had captured the NXT Championship from Finn Bálor. The Demon's record-breaking 292-day reign as champion has ended, and a furious submission specialist now stands atop NXT. What will Samoa Joe's huge victory mean for the future of NXT?

Asuka, the undefeated NXT Women's Champion, made her first appearance since winning the title in surprising fashion from Bayley at TakeOver: Dallas, taking on Eva Marie. The “Total Divas” star seemed a little reluctant to lock up with the champion at first, evading The Empress of Tomorrow's devastating kicks. But there was no escaping the aggressive champion, who soon caught Eva Marie and took control of the bout.

Eva briefly grounded Asuka with a shoulder tackle, but the NXT Women's Champion could not be kept down. Asuka rebounded in a rage, sending Eva crashing to the arena floor with a flying hip attack. Eva looked to be on the ropes, until her close confidant Nia Jax made her way to ringside. The towering presence of Jax at ringside gave Eva a confidence boost, and perhaps distracted the champion, allowing Eva to get the upper hand. Despite her best efforts, Eva could not overcome the pure fury of the NXT Women's Champion, who stunned Eva with a series of kicks, finally connecting with a spinning heel kick to pick up the victory.

After the bell, Nia Jax entered the ring and confronted Asuka. The Empress of Tomorrow threw a similar kick to the one that felled Eva Marie, but Nia simply stepped out of the way, then got right in the champion's face, showing no fear.

Former NXT Tag Team Champions Scott Dawson & Dash Wilder were in no mood to mess around this week. Their NXT Tag Team Championship loss to American Alpha at TakeOver was still fresh in their minds, and The Revival took out their frustrations on the team of Matt Lee & Jeff Parker, absolutely demolishing them before putting Lee away with the Shatter Machine.

After the beatdown, Dawson grabbed the microphone and sent a warning to the rest of the tag team world that nobody is safe until they get the NXT Tag Team Titles back.

Returning to NXT for the first time since WrestleMania, former Intercontinental Champion Zack Ryder reunited with Mojo Rawley to hopefully get in the hunt for the NXT Tag Team Titles. Blake & Murphy used nefarious means to take control and work over Ryder's leg, but the unbridled energy of The Hype Bros was too much to overcome. Rawley & Ryder put Blake away with the Hype-Ryder to win the bout, but The Hype Bros didn't have much time to revel in their win, as The Revival ambushed them from behind. Dash & Dawson hurled Ryder into the ring post and connected with a devastating double-team maneuver on Rawley on the arena floor. Will anyone be able to stop The Revival as they target American Alpha?

Now that Enzo Amore & Colin Cassady are on Raw and SmackDown, Carmella is on her own in NXT for the first time. If her bout against Aliyah is anything to go by, The Princess of Staten Island is going to be just fine. Carmella took on the newcomer and withstood everything Aliyah threw her way, getting back on offense and locking on her trademark neck crank to earn the submission victory.

Though Elias Samson felt NXT General Manager William Regal misinterpreted his mysterious lyrics, The Drifter still relished the opportunity to square off with NXT's newest Superstar, Shinsuke Nakamura. The King of Strong Style dared Samson to come right at him and quickly took advantage of The Drifter's eagerness to engage.

Though Samson cut off Nakamura's blistering offense with a big clothesline, the NXT Universe rallied behind The King of Strong Style as he returned to his feet and staggered The Drifter with a devastating kick, setting up a vicious sequence that culminated in the Kinshasa, putting Samson down for the three-count and ensuring that Nakamura would remain undefeated. 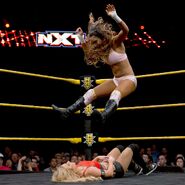