The April 27, 2012 Edition of Smackdown is a Professional wrestling television show of the WWE's Smackdown brand, which took place on April 24, 2012 at the Van Andel Arena in Grand Rapids, Michigan.

Celebrating the fact that he “finally got rid of AJ” one week ago, Daniel Bryan went on to claim that his 18-second loss to Sheamus at WrestleMania “does not count.” Insisting that it should instead be counted as his ex-girlfriend’s loss, SmackDown’s resident “YES”-man once again promised to soundly defeat the World Heavyweight Champion in a 2-out-of-3 Falls Match at Extreme Rules.

Bryan then turned his attention to Monday’s Raw SuperShow. In regard to his controversial actions as guest referee – in a match between The Celtic Warrior and Mark Henry – Bryan produced slow-motion footage, attempting to purity his fast three-count that cost Sheamus the contest. He then justified putting his adversary in a post-match Yes Lock as an act of self-defense once The Great White lost his cool.

Did Alberto Del Rio then interrupt the submission specialist? “YES!” The Mexican Aristocrat wasted no time reasserting himself as a top contender for the World Heavyweight Title, as his personal ring announcer Ricardo Rodriguez played on Bryan’s catchphrase by repeatedly shouting “Si!” Intercontinental Champion Big Show soon joined the party, sending both Del Rio and Bryan heading for the hills with the mere promise of the WMD. The petrified Rodriguez wasn’t so lucky, however, as he was summarily chokeslammed by The World’s Largest Athlete.

Just when Big Show looked ready to finish Alberto Del Rio with a chokeslam, Cody Rhodes attacked him from behind. This gave the giant a victory by disqualification, yet the fireworks were just getting started.

Although Rhodes attempted to hit Show with a Kendo Stick after the bell, anger seemed to be the only effort he provoked from the giant. He then tried to wield a steel chair, only to have it punched out of his hand. Refusing to give up his advantage, the grandson of a plumber took off his belt to use as a weapon. However, before he could, the World’s Largest Intercontinental Champion delivered a fierce kick, yanking the belt out of Rhodes' hand before turning it on its owner.

John Laurinaitis has declared that a spin of the wheel – to happen prior to Extreme Rules Sunday during a pre-show event, which streams live at 7:30 ET/4:30 PT exclusively on WWE.com, YouTube.com/WWE and Facebook.com/WWE com – will determine the match stipulation of the Extreme Rules Intercontinental Championship rematch between Big Show and Cody Rhodes.

With the help of Twin Magic, new Divas Champion Nikki Bella triumphed over Alicia Fox just four days after she captured the butterfly title from Beth Phoenix in a Lumberjills Match on Raw SuperShow.

This Sunday, The Glamazon will get her Divas Title rematch at Extreme Rules. But after it was reported that Beth suffered a severely sprained ankle on the night of her championship loss, what role will the injury will play in the high stakes contest?

Thanks to General Manager John Laurinaitis and his Executive Administrator Eve, Theodore Long joined the SmackDown announce team in a very usual way. The former GM was ordered to report to “The Teddy Table” for commentary duty in a “People Power” T-shirt. He was also instructed not to say a word unless Laurinaitis himself fed the lines to his reluctant employee from the back.

The first match Teddy presided over involved SmackDown’s hot, up-and-coming tag team that he himself had not signed when he was SmackDown General Manager: Titus O’Neil and Darren Young. After they neutralized The Personification of Domination in the match’s final seconds, the powerful Titus held Tatsu high in the air. This allowed his partner “Mr. No Days Off” Young to closeline his Japanese opponent, paving the way for O’Neil to pick up another huge pin fall.

Playing it safe in an exclusive interview made possible by Mr. Laurinaitis, Michael Cole reminded his serpentine guest that the General Manager had forbid Superstars from touching announcers – following Brock Lesner’s attack on Josh Mathews on Raw SuperShow. In response, Orton reminded Cole that, when pushed, he was not known for being the most rational of competitors.

The focus then moved to Kane, who The Viper will face in two days at Extreme Rules. Orton made it clear that their Falls Count Anywhere Match will go above and beyond winning or losing. Though his nemesis is known as The Devil’s Favorite Demon, WWE’s Apex Predator proclaimed that not even the Devil himself is capable of unleashing the hell that he will bring this Sunday.

When a visibly irate Jinder Mahal interrupted in order to poke a stick at Orton, the nine-time World Champion asked him one simple question: “Are you an announcer?” When the Punjabi Superstar responded in the negative, he quickly found himself the victim of the RKO.

Earlier in the evening – with Theodore Long standing by in an apron – John Laurinaitis informed Aksana that he was giving a special try-out match to her friend Antonio Cesaro. If he ended up liking what he saw, he also indicated that he may sign him to a Superstar contract.

With Aksana serving as special guest ring announcer, the aggressive SmackDown prospect overcame Tyson Kidd in his debut match, driving his face into the canvas with absolute force. Following his triumph, Laurinaitis ordered Teddy to enter the squared circle and raise the victor’s arm. Moments later, Aksana and Cesaro began to kiss in the middle of the ring – leaving a humiliated Mr. Long with a look of absolute heartbreak.

Two days before he would face Big Show in a WrestleMania rematch for the Intercontinental Title, Cody Rhodes attempted to pick up momentum against another giant, The Great Khali. However, after being attacked by Rhodes one week ago, The Punjabi Nightmare was out for retribution. Catching the second-generation Superstar in mid air, Khali executed the Punjabi Plunge to score the payback victory.

Is this a prelude of things to come when Rhodes battles The World’s Largest Athlete this Sunday?

With The Usos enjoying the carnage in the back, the daunting Ryback ripped through another unfortunate opponent and continued his raising streak of Friday night dominance. How far will his path of destruction reach?

Still unable to deal with her ex-boyfriend Daniel Bryan telling her that he “wished she was never born” one week ago, AJ once again lost control, assaulting her best friend out of nowhere.

Following the controversial ending in his match against Mark Henry on Raw SuperShow, Sheamus faced The World’s Strongest Man for the second time in one week. In the climax of their fierce showdown, The Great White prepared to attack The World’s Strongest Man from the top rope. However, when his adversary charged toward him, Sheamus was able to switch gears, leaping over Henry before executing the Brogue Kick for the victory.

Following the match, The Great White’s No. 1 contender, Daniel Bryan, emerged at the top of the ramp with a huge grin on his face. Sheamus invited him in the ring. When he didn’t accept, the World Heavyweight Champion posed the question, “would he beat Daniel Bryan at Extreme Rules?” Not waiting for his adversary to answer, The Great White borrowed Bryan’s catchphrase, screaming “YES!” repeatedly as SmackDown went off the air. 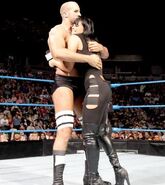 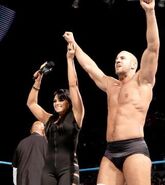 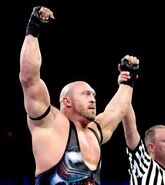 Retrieved from "https://prowrestling.fandom.com/wiki/April_27,_2012_Smackdown_results?oldid=723888"
Community content is available under CC-BY-SA unless otherwise noted.