May 3, 2017
The April 26, 2017 Edition of NXT is a Professional wrestling television show of the WWE, which took place at the Full Sail University in Winter Park, Florida on April 5, 2017.

Nikki Cross kicked off NXT in a rather unusual way. The rabid member of SAnitY began to cryptically call out “Ruby” on the microphone, asking Ruby Riot to “come out and play.”

To those unfamiliar with the Scottish Superstar, her idea of playing doesn't involve dancing or board games. Instead, Cross waited for her inked-up rival to enter the ring, before pouncing. The two foes wildly fought inside and outside the ring until a group of referees and NXT officials pulled the crazed adversaries apart.

Drew McIntyre is wasting no time making a name for himself in NXT. The recently returning Superstar has looked very impressive since taking his talents to the black-and-yellow brand, making another impactful statement with a victory over Andrade “Cien” Almas.

The arrogant Almas gave McIntyre a spirited fight, including some vicious chops across the chest, but it was the Scottish Superstar's big boot the face that garnered the 1-2-3.

Kona Reeves went on the offensive immediately against Aleister Black, delivering thunderous strikes to the tattooed Superstar. Unfortunately, Reeves’ initial onslaught was not enough to slow down the rising Black.

The mysterious Black fired back with a barrage of kicks, finishing off Reeves with a roundhouse kick to the jaw. Another emphatic victory for Black and another opponent who could do nothing but “Fade to Black.”

With each encounter, you can feel the hatred grow between Nikki Cross and Ruby Riot. The two were supposed to have a match, but instead the crazed Cross blindsided Riot during her entrance, starting an all-out brawl.

Cross and Riot fought along the stage and entrance ramp until referees and NXT officials tried to break them up. Officials’ first attempt failed as Riot pushed them away before launching herself off the stage onto Cross. Finally, the two feisty competitors were pulled apart ... for now.

WWE United Kingdom Champion Tyler Bate and Gentleman Jack Gallagher could wrestle one another 100 times and they would deliver something new and entertaining every encounter. These British-born Superstars didn't disappoint as they battled for the first time in front of the NXT Universe.

Gallagher's technical prowess was on full display as he twisted Bate's limbs like a pretzel. Bate showed the heart of a champion, enduring the pain of his gentleman challenger's submission holds. Bate eventually managed to pry free of his opponent's grasp to hit a rolling wheel kick before nailing the Tyler Drive ’97 for the victory. 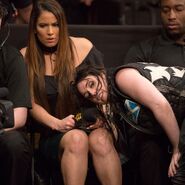 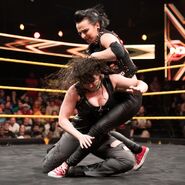 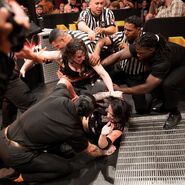 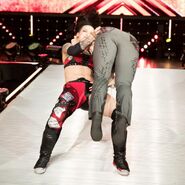 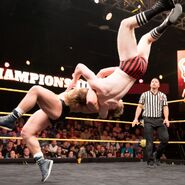 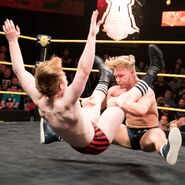 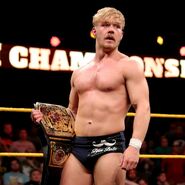