The April 25, 2016 Edition of RAW is a Professional wrestling television show of the WWE's RAW brand, which took place on April 25, 2016 at XL Center in Hartford, Connecticut.

She has arrived. She, of course, being Stephanie McMahon. And Shane McMahon's stint as Raw's showrunner might not even make it past the first pay-per-view of the “new era” now that The Billion Dollar Princess has returned to claim what she believes is hers.

Stephanie chose to make her presence felt right as Shane — as he has done over the past few weeks — was running through his plans for the evening's show, leading to a confrontation between the two siblings that included a bombshell revelation. Stephanie revealed Sunday at WWE Payback, Mr. McMahon will decide which of his children assumes control of Monday Night Raw. In the exchange's tense conclusion, Shane had Stephanie forcibly removed by security when she would not leave his (for now) ring of her own accord.

That's strike one for The League of Nations, all of whom were scheduled for individual matches on Raw and one of whom — Sheamus — has now fallen short, with AJ Styles playing the role of The Celtic Warrior's undoing. He had to take a hell of a beating to do it, but the No. 1 contender to the WWE World Heavyweight Champion proved worthy of both his status and his phenomenal reputation, ultimately knocking Sheamus loopy with a big sunset flip powerbomb. He then muscled out of the Cloverleaf and nailed a Phenomenal Forearm to get the win ... much to the delight of Luke Gallows & Karl Anderson.

So here we sit: a mere six days from WWE Payback and the final of the No. 1 Contenders’ Tag Team Tournament, sponsored by Booty-O's. (They make sure you ain’t booty.) That match will decide whether Enzo Amore & Colin Cassady or The Vaudevillains get a crack at The New Day. So it was only right that the W. W. E. World. Tag. Team. Champions. took a few minutes to bask in their continued glory, pay homage to Prince and address the NXT-bred upstarts who'll face them down the line.

That brought out The Vaudevillains, who tossed a few old-timey fightin’ words at the champions, only for Enzo & Cass to interrupt them, to the unmitigated delight of The New Day. And why shouldn't they be happy? After all, no matter who wins at Payback, they're still the champions. So as a certain Purple One once said, let's go crazy.

Whoa, they really are that good. Anyone who hasn't heard about Luke Gallows & Karl Anderson's skills as a magic-killing tag team got a good glimpse of what everyone in Japan already knew: They are not to be trifled with and they can barely be stopped. The Usos only got about two minutes into their highly anticipated tussle with the debuting tag team before Anderson took charge and teed up Jey Uso for a rampaging Gallows.

Jimmy was able to briefly change the complexion of the contest when he finally tagged in, but the newcomers’ teamwork and utter disregard for The Usos’ well-being gave them the upper hand. After Jey was tossed over the barricade, Gallows & Anderson disposed of Jimmy, and the match, with the Magic Killer. It took no less than Roman Reigns himself to stop Gallows & Anderson from pulverizing his cousins after the bell.

Having lost three of his last four, Sami Zayn's bout against Rusev was something of a must-win before his marquee bout against Kevin Owens at WWE Payback. With Lana back at his side, Rusev carried a numbers advantage that could have swung the match, but The Bulgarian Brute never even got to use it. After chipping away at Rusev's defenses for a good 10 minutes, Zayn slid out of the Accolade and rolled Rusev up for the victory. (Yes, that means The League of Nations is 0-2 so far.) The win earned him an ovation and a few shoes chucked his way from Lana, but Zayn was too happy to care. That is, until Owens ambushed him from behind on his way up the ramp, leaving him in a heap as he had so many times before and may well do again.

Having put The Social Outcasts in his rearview mirror, Apollo Crews has now set his sights on the rest of the WWE roster. The first Superstar to cross him? Stardust, whose own attempt to climb the heavens at WrestleMania landed him just short of the Intercontinental Championship, and whose late father Dusty Rhodes played a key role in Crews’ development. (“The American Dream” even gave him the name “Apollo Crews.”)

Crews seems to have taken The Dream's lessons to heart, while Stardust's insanity is tripping him up. The space creature showed resilience against his father's protégé by kicking out of Crews’ standing moonsault, but Crews sealed the deal with an enzuigiri/Spinning Sit-out Powerbomb combo.

Bad news for fans of “The Ambrose Asylum”: A steaming-mad Dean Ambrose opted out of hosting another edition of the hottest new talk show in WWE after Chris Jericho cheap-shot last Monday on Raw. Good news for fans of rage-fueled brawls: Ambrose called Jericho out instead, and The Ayatollah of Rock ’n’ Rolla answered, if only to demand Ambrose apologize for failing to show him the proper deference before their match Sunday at WWE Payback. The Lunatic Fringe punched Jericho in the face instead, though their brief fight ended badly for him when Jericho tripped him up on the announce desk and managed to lock in the Walls of Jericho atop the table.

Remember when Emma used to dance and walk around in a flurry of bubbles? Yeah, that's not happening anymore. This new Emma — “Evil Emma,” colloquially — wears aviators and driving gloves and suffers absolutely zero fools, and she gave an incredibly impressive performance against Natalya on Raw.

Unfortunately, The Queen of Harts is on a roll that can't be stopped. Despite the potentially distracting presence of WWE Women's Champion Charlotte at ringside, the No. 1 contender shook off Emma's offense and locked in the Sharpshooter for the win, staring the champion down while she did it.

Damien Sandow's back on Raw! But baby, his return was much too fast, as his scheduled opponent, Baron Corbin, didn't even make it to the ring before Dolph Ziggler bum-rushed The Lone Wolf from behind. Ziggler repaid the Andre the Giant Memorial Battle Royal winner with the type of beatdown Corbin's fast becoming known for bestowing on several opponents, Ziggler in particular. The Showoff's attack on Corbin was so relentless he sent the imposing newcomer into retreat, meaning they'll walk into their freshly made match at WWE Payback with the power balance reversed.

As The Miz's Intercontinental Title defense against Cesaro has crept closer and closer, The King of Swing has continuously managed to one-up The Awesome One at every turn. So it's hard to blame The Miz for making a last-ditch attempt to position himself as the “legendary” championship's proper bearer by running down the Cesaro Section as nameless, faceless hangers-on who don't know greatness when they see it.

Enter Cesaro himself, who ran down both Miz's De Niro impression (“4/10”) and blasted a bum-rushing Miz himself with the Very European Uppercut before Maryse ran in and saved her man from further humiliation. And yes, Cesaro was wearing his suit the entire time. The stuff of legends indeed.

It's officially a clean sweep against The League of Nations, and you can thank “The Guy” for sealing the deal. Roman Reigns emphatically dispatched Alberto Del Rio at the end of a grueling main-event battle, despite taking a kick to the face from The Essence of Excellence and having to deal with the unwelcome arrival of Luke Gallows & Karl Anderson atop the ramp.

Reigns put Del Rio away with a Spear almost immediately after Gallows & Anderson appeared, but The Big Dog found himself swarmed by the big tag team just moments later. AJ Styles quickly came to call his buddies off and Reigns pounced, Superman Punching everyone in sight until Styles swooped in with a Phenomenal Forearm to take Roman out cold. Is that true collusion or a mere mish-mash of intentions and opportunity? Well, we’re not saying they are in cahoots. But if they were, it worked pretty perfectly.

New Day, Amore & Colin & The Vaudevillains confronted each other 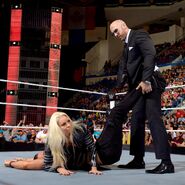 Retrieved from "https://prowrestling.fandom.com/wiki/April_25,_2016_Monday_Night_RAW_results?oldid=1551577"
Community content is available under CC-BY-SA unless otherwise noted.