The April 23, 2012 Edition of RAW is a Professional wrestling television show of the WWE's RAW brand, which took place on April 23, 2012 at Joe Louis Arena in Detroit, Michigan.

Former SmackDown General Manager Teddy Long kicked off Raw SuperShow by introducing John Cena for the much-anticipated contract signing with Brock Lesnar. General Manager of Raw and SmackDown John Laurinaitis came out next to announce that Lesnar hadn't arrived yet at Joe Louis Arena, so the contract signing would take place on Brock's terms – not Cena's. Much to the GM's surprise, WWE Hall of Famer Edge made his electric return to Raw SuperShow with something important to say to John Cena.

The Rated-R Superstar talked about the kind of man he knows Cena really is – the man who brutally beat him in a TLC Match and also chucked him into the Long Island Sound. Edge said that while he's never seen eye-to-eye with Cena, they can agree on their never-ending love for WWE, something that The Ultimate Opportunist claimed Brock doesn't have. Edge continued his emotional pep talk by telling the Cenation leader that he must win at Extreme Rules because he can't let someone who doesn't care about WWE somehow become the "face of WWE," stating that it would be a slap in the face of WWE Legends like Shawn Michaels, The Undertaker, and even Edge himself.

This time, Chris Jericho let his fists do some talking. Jericho notched a big victory in the ring one week after further verbally berating CM Punk on Raw SuperShow. Kofi Kingston had the crowd behind him and nailed multiple daring maneuvers from his arsenal, but Jericho capitalized on the high-flyer's overconfidence and nailed him with a Codebreaker before making him tap to the Walls of Jericho.

Afterwards, Jericho ridiculed Punk's family and claimed he would expose the WWE Champion as a fraud in Punk's own hometown of Chicago. Jericho said that Punk will need something to help him cope with failure, and that's why he decided to buy him a generous "gift" tonight.

The General Manager of both Raw and SmackDown has a new employee in his administration. Laurinaitis announced that he has decided to hire Eve as his Executive Administrator. The WWE Diva accepted Laurinaitis' offer and assured him that he won't be disappointed.

CM Punk probably didn't even have to open Chris Jericho's gift to know what was inside. After receiving a basket full of liquor from his rival, The Straight Edge Superstar said he has a present for Jericho, too – the one he's going to personally deliver in a Chicago Street Fight at Extreme Rules.

The dominant warrior from Japan continued to unleash his wrath, this time against his highest-profile opponent yet. Lord Tensai crushed R-Truth with a massive sit-down powerbomb before driving him into the canvas with a powerful claw full of green mist. Before his convincing win, the WWE Universe heard Tensai speak in a video message that was in half-English and half-Japanese.

Kane told the Detroit crowd that he discovered Randy Orton's weakness when he hit The Viper's father in the back of the head with a lead pipe. Orton returned the favor on Raw SuperShow by kidnapping Kane's father, Paul Bearer, and locking him in a freezer backstage. The Big Red Monster laughed off Orton's attempt to rattle him, saying that he had no intention of saving Bearer because he's always considered the devil to be his one true father.

The two rivals then gave the WWE Universe a preview of what's in store for their Falls Count Anywhere Match, as Orton blasted Kane over the barricade with a lead pipe. Kane then retreated into the crowd as a fired-up Orton took to the ring to revel in the adrenaline rush.

The duo of Cody Rhodes and Alberto Del Rio went to work on Big Show, doing everything in their power to keep The World's Largest Athlete from getting to his feet. Rhodes even remarkably secured a figure-four leg lock on Big Show, but Del Rio wanted no part of the battle when Big Show rallied his way back. Big Show then drilled Rhodes with a towering chokeslam for the victory as Del Rio bailed on his tag team partner.

Chris Jericho pleaded with GM John Laurinaitis to strip CM Punk of his WWE Championship because he saw him drinking alcohol in the locker room. After Laurinaitis expressed some doubt that he has the power to do that, his new Executive Administrator, Eve, said Laurinaitis actually does have the right to strip him of the title if in fact Punk violated WWE policy, which states WWE Talent is not allowed to drink alcohol within 12 hours of a WWE Live Event. Laurinaitis agreed to set up a sobriety test to find out if there is credible proof that Punk drank alcohol in the locker room and violated the policy.

Trying to get an interview with Brock Lesnar had drastic consequences for Josh Mathews. After Brock rebuffed Mathews' line of questioning about his Extreme Rules Match against John Cena, Brock choked the commentator against the wall, and then sent him flying into a steel grate. Mathews was taken to the hospital for further evaluation following Lesnar's attack.

In one of her first acts of business as Executive Administrator, Eve turned a regular contest between Divas Champion Beth Phoenix and Nikki Bella into a Lumberjill Match. The Lumberjills played a big role in the clash, as they ganged up on The Glamazon after she sprained her ankle jumping off the ring apron. Phoenix attempted to fight through the painful ankle injury and paid dearly for it. Nikki Bella shocked the WWE Universe by defeating Phoenix and ended her 200-plus-day reign as Divas Champion.

With Teddy Long and Chris Jericho looking on, CM Punk took a public field sobriety test administered by two Detroit police officers. First, Punk was asked to recite the alphabet backwards but failed to do so, as the WWE Champion claimed that nobody knows how to do that even when they're sober. Next, Punk was asked to walk a straight line in the ring, but failed to do that successfully as well. After the officers ruled that Punk failed the sobriety test, Long requested that Punk hand over his WWE Championship.

However, The Straight Edge Superstar was granted one more chance by Long to pass the public sobriety test, and proceeded to walk a straight line across the ring several times while reciting the alphabet backwards at the same time. Right after he reached "A" in the alphabet, the WWE Champion surprised Jericho with an attack that sprawled quickly to the arena floor.

Special guest referee Daniel Bryan provoked World Heavyweight Champion Sheamus to hit him during the match, knowing he would be fired from WWE if he put his hands on another referee, per GM John Laurinaitis. Mark Henry took advantage of the distracted Sheamus and plowed him over as Bryan followed with the quick three-count.

After Bryan rejoiced in his dastardly deed and threw his referee shirt at Sheamus, The Great White tried to attack his Extreme Rules opponent before Bryan locked him in the "Yes!" Lock. In a post-match interview, Sheamus warned that he would make Bryan pay in their 2-out-of-3 Falls showdown.

The Detroit crowd was firmly behind the team of Santino Marella and Zack Ryder as they took on Primo and Epico in a Non-Title Match. One week after losing to Big Show and The Great Khali, the WWE Tag Team Champions suffered another disappointing loss when Santino struck with The Cobra. After the defeat, A.W. offered the arguing champs his services backstage and left them his business card.

Kane pulled Paul Bearer out of the freezer only to push him back inside It appeared at first that The Big Red Machine was going to rescue his father from the numbing pain of being trapped inside the freezer. But Kane mercilessly rolled him right back into the freezer as Bearer cried out in anguish.

Brodus Clay and his little "brother," Hornswoggle, got their tag team groove on against Dolph Ziggler and Jack Swagger until Vickie Guerrero interfered and slapped The Funkasaurus across the face. Fortunately for Clay, his Funkadactyls were there to watch his back, and Vickie's best effort to make amends with a Brodus-style dance wasn't fooling anyone. Guerrero was then humiliated by Hornswoggle, who sent her running with a bite on the rear end.

Brock Lesnar came out for the Extreme Rules Match contract signing, but John Cena was nowhere to be found at first. Brock proceeded to give General Manager John Laurinaitis a list of changes he wants made to his contract, otherwise he would refuse to fight Cena at Extreme Rules. Saying he's not the "naïve farm boy" he used to be the first time around, Brock demanded to have oversight over Laurinaitis' future decisions, access to Mr. McMahon's private jet, the preference to show up on Raw SuperShow only when he wants, no fines of any kind for his actions, and finally, if he wins on Sunday, Raw has to be named to "Monday Night Raw: Starring Brock Lesnar."

After Laurinaitis agreed to Brock's demands, Cena walked out to the ring with his Thuganomics-era lock and chain around his neck and had a heated staredown with his Extreme Rules Match opponent. Following some verbal barbs from Lesnar, the Cenation leader signed the contract and didn't say a word, never taking his eyes off Brock as the show came to a close. 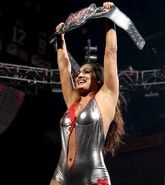 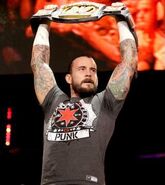 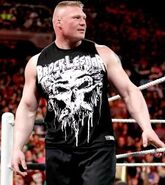 Retrieved from "https://prowrestling.fandom.com/wiki/April_23,_2012_Monday_Night_RAW_results?oldid=1256953"
Community content is available under CC-BY-SA unless otherwise noted.