April 27, 2021
The April 20, 2021 of NXT was a Professional wrestling television show of the WWE which took place at the Capitol Performance Center in Orlando, Florida.

Appearing for the first time since prevailing in a savage Unsanctioned Match against Adam Cole at NXT TakeOver: Stand & Deliver, Kyle O'Reilly pondered his future plans, considering possibly challenging Johnny Gargano or Karrion Kross for their respective titles. But he was cut off by Cameron Grimes, who offered an alliance that he promised would be financially fruitful for O'Reilly. O'Reilly was seemingly happy to comply with Grimes but was only playing possum, and he dropped him with a single right hand and declared that The Technical Savage would be his first opponent.

NXT's Tortured Artist took it to the loquacious LA Knight with his hard-hitting style, but he lost his focus after making eyes with Indi Hartwell at ringside. Knight used the opportunity to drop Dexter Lumis with a facebuster for the win. Afterward, Lumis and Hartwell yet again appeared poised to lock lips before the rest of The Way pried Hartwell away.

Less than impressed with Breezango's Queen's Guard garb, Zack Gibson & James Drake punished Tyler Breeze & Fandango with their signature smash-mouth offense as well as their deceptive savvy, as Drake feined a knee injury to gain the upper hand. The Grizzled Young Veterans later sealed the deal with the Ticket to Mayhem on Breeze.

"The Warrior of The Sun" surpassed the high expectations for her debut in an edge-of-your-seat battle with Zoey Stark, who again impressed. But Stark was bested by Sarray's deep arsenal of unique offense and blistering strikes, with Sarray claiming the win after a huge spinning heel kick and t-bone suplex.

The combatants respectfully embraced afterward, only for the feel-good moment to be ruined by Toni Storm's vicious attack on Stark, who defeated Storm on the NXT TakeOver: Stand & Deliver Pre-Show.

Following Imperium's assault last week on Killian Dain & Drake Maverick, Dain came to ringside to confront Wolfe in puzzlingly diplomatic fashion. Maverick also joined and seemed set on resolving the matter with his fists before Dain carried him out. All the commotion provided enough of a distraction for Chase Parker to nearly scored an upset pin on Fabian Aichner, but Imperium regathered themselves and dropped Tyler Breeze with the European Bomb for the victory.

The NXT Universe wondered whether Kyle O'Reilly would ever be the same following his grueling war with Adam Cole. The initial answer? No, and it wasn't a bad thing. O'Reilly not only looked more self-assured than ever, he also showcased a seemingly newfound killer instinct. Though Cameron Grimes astutely targeted O'Reilly's previously injured neck, O'Reilly rallied and put The Technical Savage away with a devastating knee from the top rope. 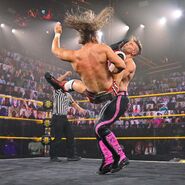