April 27, 2016
The April 20, 2016 Edition of NXT is a Professional wrestling television show of the WWE, which took place at the Kay Bailey Hutchison Convention Center in Dallas, Texas on April 2, 2016.

As some of NXT's most popular stars make an impact on Raw and SmackDown, there's never been a better time for the rest of the roster to try to make their mark between the yellow ropes, or for some new faces to introduce themselves to the NXT Universe. This week featured some of both, as new NXT Tag Team Champions American Alpha accepted the challenge of Enzo Amore & Colin Cassady, and Apollo Crews found himself in the crosshairs of Samoa Joe. Plus, the fun-loving No Way Jose made his NXT debut!

Two of NXT's most popular teams clashed in a friendly battle to kick off the show. Last week, Enzo Amore & Colin Cassady asked the NXT Tag Team Champions for this non-title showdown, wanting to see what American Alpha is all about. Amore found out firsthand after the bell, as Gable took him down to the mat with ease. Gable and Jordan quickly grabbed a hold of Enzo's arm, tagging in and out to work over their brash opponent.

The scrappy Amore finally slipped away from the champions and tagged Big Cass into the bout. Cassady locked up with Jordan and used his size and strength advantage to take control of the match. The teams seemed to reach a stalemate after Gable and Amore knocked heads in the corner, but Enzo stumbled back into his corner and brought Big Cass back in. The experienced duo looked to have the champions on the ropes, but the wily Gable evaded a splash from the 7-footer and tagged in a fired-up Jordan. Big Cass took a bullet for Enzo, diving in the path of a spear from Jordan, but that left the New Jersey native alone in the ring with the champions. American Alpha connected with Grand Amplitude to earn a big victory over Raw and SmackDown's newest Superstars.

The Dallas crowd was in for a treat this week, as they witnessed the debut of NXT's newest Superstar, No Way Jose. The stoic Alexander Wolfe was thrown off by the newcomer's unique style, as Jose danced his way out of the German's clutches early on. Wolfe tried to force Jose to submit, but when the referee asked him if he gave up, the energetic newcomer had only one answer: “No way!”

Jose may be light on his feet, but Wolfe learned that he had heavy hands, as well. No Way Jose staggered the German with a series of home-run swinging double axehandles before winding up to clobber Wolfe with a big right hand to the jaw, making his debut a victorious one.

The powerful Nia Jax is out to establish herself one of the top challengers to NXT Women's Champion Asuka. She made a good case for herself this week, absolutely dismantling Deonna Purrazzo in minutes. The strong competitor got the three-count after crushing Purrazzo with a devastating leg drop.

Furious that he did not leave TakeOver: Dallas with the NXT Championship, Samoa Joe declared that Apollo Crews was the next victim in his war to become the best. However, Crews has been riding high since debuting on Raw and SmackDown following WrestleMania. The leader of the Apollo Nation gained the early advantage, wearing Joe down with a headlock, but the veteran slipped out and dazed Crews with a flurry of right hands.

The two Superstars traded control, going back and forth, until Samoa Joe exerted his well and got the upper hand on Crews. The veteran pummeled Crews into the canvas, but that only fired up his opponent. Crews took Joe down with a suplex, put him on the mat with a big clothesline and followed it up with a picture-perfect moonsault, but could not put the submission specialist away.

Crews tried to capitalize with a big boot and his spinning powerbomb, but ran right into a big slam out of the corner by Joe. The submission specialist responded by unleashing on Crews with a series of punches before locking the Coquina Clutch on, forcing Crews to tap out. 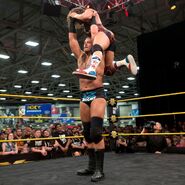 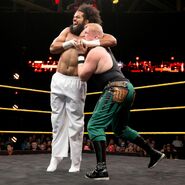 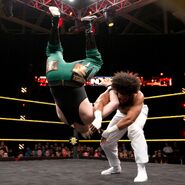 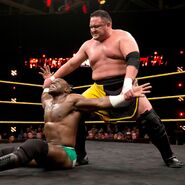 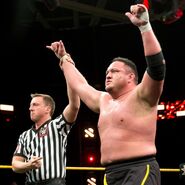