The April 2, 2012 Edition of RAW is a Professional wrestling television show of the WWE's RAW brand, which took place on April 2, 2012 at American Airlines Arena in Miami, Florida.

Hot off his team's big win at WrestleMania, John Laurinaitis wasted no time exerting his power as the General Manager of both Raw and SmackDown. Vowing to give the WWE Universe exactly what they wanted, Laurinaitis announced United States Champion Santino Marella would defend his title in a Triple Threat Match with Dolph Ziggler and Jack Swagger later in the night. Then, after being criticized by WWE Champion CM Punk, Johnny announced Punk would have to face big Mark Henry in a WWE Championship Match.

In a show of good sportsmanship, The Rock kicked off Raw SuperShow by thanking John Cena. “Last night at WrestleMania, John Cena brought it to The Rock like never before," The Great One said. The Rock then gave props to Cena for bringing a highly-potent offense on The Grandest Stage of Them All and called their match an honor. "We made history at WrestleMania, and we did it for the fans,” he said. To address those who might question how long he'll be around, The Rock made a bold proclamation. "This is just the beginning," and vowed to one day be WWE Champion again!

With Vickie Guerrero at ringside cheering on both Dolph Ziggler and Jack Swagger, United States Champion Santino Marella defended his title in a Triple Threat Match made by Johnny to start what he called an era of “people power.” Despite the odds, the champion presented a formidable challenge and preserved his title by hitting Jack Swagger with The Cobra. After the match, the challengers wanted a piece of the champion on the entrance ramp. But as they pursued him, Brodus Clay came out to even the odds. But when Ziggler charged, he was met with an immovable object, and rebounded hard to the entrance ramp. With Swagger still reeling, Brodus led Santino and his lovely counterparts in a celebratory dance.

The mysterious Lord Tensai made his Raw debut, much to the dismay of Alex Riley. Right out of the gate, Tensai wasted no time dismantling Riley, coming after him with a series of vicious blows and head butts. Next, he hoisted Riley high over head and planted him to the canvas. Continuing his painful path, Tensai blasted his opponent with a series of brutal elbows to the head. As the destructive Lord continued to brutalize Riley, he sent all of his crushing 360 pounds onto him. Seeing enough carnage, the ref finally stopped the match. But Tensai wasn't done yet. After the match officially ended, he clutched Riley's skull in a claw and planted him to the canvas for more punishment.

After challenging the authority of new Raw and SmackDown General Manager John Laurinaitis at the start of the night, Punk was forced to defend his title against the formidable Mark Henry. In a dominant show of force, Henry took it to Punk as soon as the match began, and Punk found himself just trying to preserve his title for most of the bout. Each time Punk appeared to gain the upper hand, Henry would come right back.

In a promising display of offense, Punk delivered a series of blows and a kick to the head, then launched himself from the top rope onto Henry. But the risky move appeared to take its toll on Punk, who was then tossed from the ring and counted out of the contest. But Henry wasn't done yet. With Punk down, Henry blasted him with a World's Strongest Slam to the arena floor, leaving him writhing in pain.

After the brutality, Laurinaitis emerged to inform Punk that the WWE Universe wants to see him defend his title more often. “I see some dark clouds in your horizon,” he warned.

Adding insult to injury, Chris Jericho came to ringside to recall his WrestleMania Match with Punk. With The Straightedge Superstar still writhing in pain on the arena floor, Jericho hoisted a bottle of booze and proposed a toast. But instead of sharing a drink, Jericho poured the bottle's contents all over the fallen champion. Next –while verbally assaulting Punk's family – he warned him about drinking and proceeded to smash the glass bottle over his head!

Alberto Del Rio interrupted new World Heavyweight Champion Sheamus on Raw to reveal that Laurinaitis gave him a match against Sheamus this Friday on SmackDown. According to Del Rio, if he wins, he gets a World Title Match. Not fazed in the least by the impending match, Sheamus dropped Del Rio with a hard-hitting Brogue Kick.

Zack Ryder appeared to be poised for a win with a Broski Boot to The Miz, but The Awesome One countered with a Skull-Crushing Finale for the victory. Before the match, Eve showed no remorse for what she did to Ryder at WrestleMania.

As Kofi Kingston tangled with former Intercontinental Champion Cody Rhodes, newly crowned Intercontinental Champion Big Show entered the arena to highlight moments from his WrestleMania match with Rhodes. After The World's Largest Athlete embarrassed Rhodes by displaying some less than flattering images of their match on the arena screen, Kingston capitalized and blasted his distracted opponent with Trouble in Paradise for the win.

Brock Lesnar returned and with one crushing F5 to John Cena completely changed the entire landscape of WWE!

The shocking return happened after Cena admitted defeat to The Rock at WrestleMania and called him the greatest WWE Superstar. Cena apologized if he let any his fans down, then vowed to be the best he could. But after inviting The Rock to the ring, Lesnar emerged to completely unglue the WWE Universe in attendance!

Standing 6-foot-3 and 266 pounds, Lesnar eyed the WWE Universe in the AmericanAirlines Arena, then Cena as he paced around the ring. Then with emotions running high for the thousands in attendance and watching all over the world, Lesnar dropped Cena with a brutal F5!

What is next now that this dominating force has surfaced again? 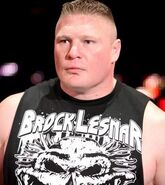 Retrieved from "https://prowrestling.fandom.com/wiki/April_2,_2012_Monday_Night_RAW_results?oldid=1551531"
Community content is available under CC-BY-SA unless otherwise noted.