April 20, 2016
The April 13, 2016 Edition of NXT is a Professional wrestling television show of the WWE, which took place at the Kay Bailey Hutchison Convention Center in Dallas, Texas on April 2, 2016.

With NXT TakeOver: Dallas in the rear-view mirror, the Superstars of NXT are jockeying for position as the champions look for their next contenders. Meanwhile, the NXT Universe were on the edge of their seats waiting for this week's main event, featuring the Wednesday night debut of The King of Strong Style, Shinsuke Nakamura.

After a huge win in his debut match against Baron Corbin at TakeOver: Dallas, Austin Aries was riding high. Angelo Dawkins claims to have “the curse of greatness,” but he could not counter the energy of “The Greatest Man That Ever Lived.” Dawkins tried to ground Aries, but the NXT newcomer escaped and threw everything he had at his opponent. Aries clocked Dawkins in the jaw with a devastating rolling elbow to improve his NXT record to 2-0.

Alexa Bliss has been out to show that she deserves an NXT Women's Championship match in recent weeks. However, the small but fierce competitor faced a tough challenge this week in the form of Tessa Blanchard, the daughter of WWE Hall of Famer and Four Horsemen founding member Tully Blanchard. The third-generation grappler put up a good fight, but Alexa eventually got fed up with her opponent's efforts, cutting Tessa off with a hard forearm. Bliss stopped Blanchard in her tracks, finishing her off with the Glitz Flip to earn the victory.

Days after making their SmackDown debut, The Vaudevillains were looking to also insert themselves back into the NXT Tag Team Title picture. However, the hungry duo of Johnny Gargano & Tommaso Ciampa were out to establish themselves after going their separate ways over the past few months. The manly duo worked over Gargano, focusing on Johnny Wrestling's arm.

The resilient Cleveland native slipped out of The Vaudevillains’ clutches and tagged in his hard-hitting partner, who staggered English & Simon Gotch with an array of strikes. Gotch nearly caught Ciampa off-guard with a roll-up after a blind tag, but Ciampa kicked out and locked on a deep armbar. Gotch tapped out, giving Ciampa & Gargano a huge victory.

Though he came up short against Austin Aries at TakeOver, Baron Corbin was out to prove that the loss was just a fluke. The Andre the Giant Memorial Battle Royal winner did just that, bulldozing the 320-pound Tucker Knight in minutes. The Lone Wolf weathered a brief onslaught from Knight before hoisting the big man up for End of Days and getting the three-count.

Though it was strange to see Bayley without the NXT Women's Championship, the NXT Universe was still firmly in her corner as she took on up-and-comer Liv Morgan. The New Jersey native showed no fear in going right after the former champion and showcasing her impressive agility, but the experienced Bayley showed that Asuka's victory at TakeOver would not slow her down, putting Morgan away with the Belly-to-Bayley Suplex. After the bell, Bayley took the microphone and asked the NXT Universe not to feel sorry for her after losing the title. Bayley said that losing the NXT Women's Title angered her, but she boldly declared that she was still standing and that she will be champion again.

“The Perfect 10” stopped playing games and pounced on Nakamura, trying to keep the hard-hitter down. However, with the crowd behind him, Nakamura rallied back to his feet and took control, staggering Dillinger with a series of brutal strikes before putting “The Perfect 10” away with the Kinshasa to pick up his second victory in NXT. 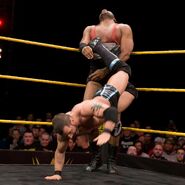 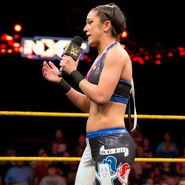