The April 12, 2000 Edition of WCW Thunder is a Professional wrestling television show of World Championship Wrestling's, which took place on April 11, 2000 in Colorado Springs, Colorado.

David Flair hits on Paisley until Daffney drags him away. 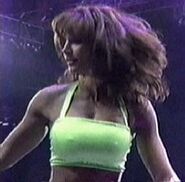 Kimberly Page in the ring.

Meng spears a Goldberg cut-out.
Add a photo to this gallery

Retrieved from "https://prowrestling.fandom.com/wiki/April_12,_2000_Thunder_results?oldid=1634731"
Community content is available under CC-BY-SA unless otherwise noted.