The 2KW Wrestling Federation, most commonly referred to as 2KW, started back in early 1999, as a no name federation created by young superstars such as Vinny Mac, SyNN, and Kid Krazy. Taking the idea of the federation as a joke, The superstars decided to air the show on Manhattan Neighborhood Network (MNN) and was seen throughout the entire island of Manhattan. With constant e-mails coming in ranting and raving with good reviews, The Federation decided to try and test the waters with a more serious tone. As 2000 came along, superstars such as Jackal, Reaper, Grifter, and Saylo arrived, joining to create a much bigger roster. 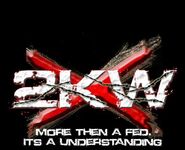 Retrieved from "https://prowrestling.fandom.com/wiki/2KW?oldid=1529331"
Community content is available under CC-BY-SA unless otherwise noted.