Austin Aries saved Gentleman Jack Gallagher from certain injury at the hands of TJP on Raw. In return, to express his gratitude toward Aries, Gallagher held a toast in A-Double’s honor on WWE 205 Live. The British gentleman told his guest that he would ensure that Aries made it to his next championship opportunity in one piece before presenting A-Double with an English lager.

The toast was short-lived, however, as WWE Cruiserweight Champion Neville soon made his way to the ring to berate Aries, Gallagher and the WWE Universe in London. Distracted by the champion’s rant, Aries was attacked by TJP and an all-out brawl quickly ensued. The alliance between Neville and TJP still strong, the duo attempted to lay waste to their adversaries.

However, throwing caution to the wind – injured knee and all – Aries turned the tables, allowing himself and Gallagher to repel The King of the Cruiserweights and The Duke of Dab. In celebration, Gallagher retrieved two new beverages and completed the toast.

Two weeks after being defeated by Tony Nese due to Drew Gulak’s interference – and one week removed from a losing effort to Gulak – Mustafa Ali entered the O2 Arena ready to regain momentum against “The Premier Athlete.” Confident following his previous victory, Nese made sure to take plenty of time to show off his physique before the action really got underway.

In the early moments of the match, Ali seemed to be restrained – likely feeling the effects of Gulak’s “no high-flying” campaign. With a more grounded strategy not paying dividends, Ali relied momentarily on his agility and high-flying ability – much to the chagrin of Drew Gulak, who was watching from the locker room. However, Nese’s raw power and physical dominance remained a determining factor in the pace of the match.

Following a hurricanrana from the top-rope, Ali picked up speed and used his agility to take control of the bout. Nese would not go down easy, and the Cruiserweights battled back and forth, but the fast-paced offense of Ali proved to be too much, as he executed an inverted 450 Splash for the win.

The rivalry between Akira Tozawa and The Brian Kendrick has gotten so intense that the two Superstars could barely look at each other before their match. Once the opening bell sounded, both competitors unloaded on one another, releasing weeks of frustration and animosity. Unrelenting in his offense, The Stamina Monster took control in and out of the ring before desperation came over Kendrick, who drove Tozawa into the announce table. Kendrick appeared content to win by count-out, but as Tozawa re-entered the ring, The Man with a Plan was happy to dish out punishment.

As Kendrick focused his resentment on Tozawa with a brutal string of submissions holds, the WWE Universe rallied behind the Japanese competitor, and he showed off exactly why he’s known as The Stamina Monster. Regaining control and nearly securing victory after a Shining Wizard, Kendrick displayed his own incredible resilience, staying in the match and attempting to secure the win by submission. When the Captain’s Hook proved fruitless, Kendrick attempted his patented Sliced Bread, but the maneuver was countered into a pinfall by Tozawa for the victory.

Irate in his defeat, The Man with a Plan immediately unleashed a brutal assault on his nemesis. Taking Tozawa to the outside, Kendrick used the steel steps as a weapon and completely decimated the Japanese competitor. Adding insult to injury, Kendrick delivered his final lesson to his once prospective protégé – never mess with The Brian Kendrick. 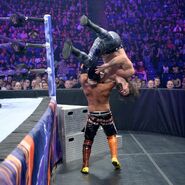 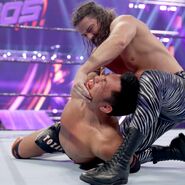 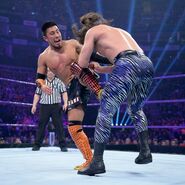 Retrieved from "https://prowrestling.fandom.com/wiki/205_Live_(May_9,_2017)?oldid=1270583"
Community content is available under CC-BY-SA unless otherwise noted.