The May 23, 2017 Edition of 205 Live is a Professional wrestling television show of the WWE, which took place at the Huntington Center in Toledo, Ohio on May 23, 2017.

Last week on WWE 205 Live, the reunited Alicia Fox and Noam Dar seemed to be looking to exact revenge on Rich Swann for breaking them up. When a courier approached Swann with a package, the former Cruiserweight Champion instead directed it to the nearby Ariya Daivari. The Persian Lion proceeded to open the package, only to be hit by a cloud of baby powder.

Ready to go one-on-one with Swann, Daivari scolded the former Cruiserweight Champion about ruining his shirt with baby powder. The two competitors exchanged blows and the match was underway. After a burst of momentum from Swann, the aggressive Daivari forcefully tossed Swann into the LED board on the ring apron, taking control of the contest.

The Persian Lion noticed Swann favoring his arm and quickly unleashed a brutal and targeted offense to keep Swann reeling. Despite the pain, Swann showed his resilience and battled back, taking down Daivari with a powerful kick. Although he was unable to secure victory following the high-impact kick, Swann pressed forward and executed his patented Phoenix Splash for the win.

Celebrating his win on the top rope, Swann was pushed face-first to the outside by Noam Dar. Reveling in her boyfriend’s actions, Alicia Fox celebrated with the Scottish Supernova and took pleasure in exacting their revenge.

After a three-month absence due to a knee injury, Cedric Alexander made his highly anticipated return against local competitor Johnny Boone.

Unfortunately for Boone, his opportunity inside a WWE ring started with a resounding elbow to the face by the returning Alexander. It was evident from the moment the opening bell sounded that Alexander was poised to send a message to the Cruiserweight division that he was back and better than ever.

Giving chase to his opponent around the ring, it didn’t take long for the returning Cruiserweight to display his incredible abilities and secure the win.

The bitter rivalry between Akira Tozawa and The Brian Kendrick logged its most extreme chapter to date as the two Superstars battled in WWE 205 Live’s first-ever Street Fight.

As the opening bell sounded, the tension in the ring was palpable. Kendrick quickly escaped to the outside to reach for a weapon, but Tozawa countered with a dive through the top ropes. Adding insult to injury, The Man with a Plan charged at his nemesis on the outside only for Tozawa to move, sending Kendrick sailing over the announce table.

The Stamina Monster wasted little time taking Kendrick back inside the ring and unleashed several strikes on his shell-shocked opponent. Despite a few flurries of momentum, Kendrick struggled to keep the intense Japanese Superstar at bay. However, the wily veteran finally took control of the bout, throwing his jacket into Tozawa’s face and commencing an aggressive offense.

In control of the contest, Kendrick showed how bitter the rivalry had become by duct-taping Tozawa’s mouth shut and applying the Captain’s Hook. The Stamina Monster soon escaped, dumping Kendrick to the outside where the two Superstars mercilessly brawled some more. Kendrick once again used the duct tape to trap Tozawa to the ring post, using his belt to attack his opponent’s back. Trying to up the ante and set up a table, Kendrick was stopped as the Japanese competitor broke free.

The bitter enemies continued to brawl, reaching deep down to throw everything they had at one another. Reversing another Captain’s Hook with a DDT into the steel steps, Tozawa placed Kendrick on top the table and ascended to the top rope. With the WWE Universe behind him, The Stamina Monster launched himself into the air, delivering a crushing senton to Kendrick through the table.

With his last bit of energy, Tozawa rolled Kendrick into the ring and secured the pinfall, delivering the final lesson. 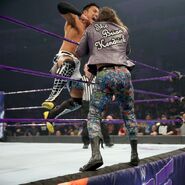 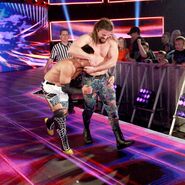 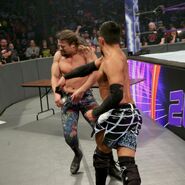 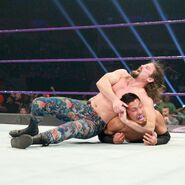 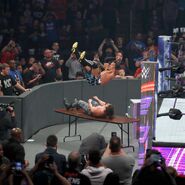 Retrieved from "https://prowrestling.fandom.com/wiki/205_Live_(May_23,_2017)?oldid=1270585"
Community content is available under CC-BY-SA unless otherwise noted.