The May 16, 2017 Edition of 205 Live is a Professional wrestling television show of the WWE, which took place at the SNHU Arena in Manchester, New Hampshire on May 16, 2017.

With the drama set in motion by Rich Swann behind them, the power couple of WWE 205 Live – Noam Dar and Alicia Fox – are back together. And with the flames of his romance rekindled, The Scottish Supernova focused his attention on Lucha Libre sensation Gran Metalik.

Gran Metalik and Noam Dar have contrasting styles, making for an interesting matchup. The Mexican Superstar utilizes a fast-paced offense as opposed to Dar’s more technical approach. Of course, the wild card for The Scottish Supernova was his girlfriend Alicia Fox, who interjected herself into the bout to try to give her beau an advantage.

Dar capitalized on Fox’s distractions, keeping his opponent grounded and targeting limbs with masterful holds. However, Metalik battled back, using his size and power advantage before unleashing a flurry of agile strikes. Battling back and forth, Dar displayed his in-ring awareness, kicking his opponent off the ropes and executing a running kick for the victory.

Two weeks ago, Drew Gulak was vindicated in his campaign to bring a more conservative style of competition to WWE 205 Live by countering a high-risk move by Mustafa Ali for a victory.

In a bout against Tony Nese last week, Ali still seemed to be feeling the effects of his encounter with Gulak, relying on a more subdued offense during the opening of the match. Eventually, Ali recalibrated and utilized his high-flying ability, picking up an impressive win against “The Premier Athlete.” Watching from the locker room, Gulak was less than pleased with Ali’s actions and subsequent victory.

Slated to go one-on-one with Nese in a rematch, Ali was attacked by Gulak on the entrance ramp and left unable to compete. Nese put an exclamation point on Gulak’s brutal assault by hitting Ali with a crushing running knee. Delivering a powerful statement about his disapproval of Ali’s in-ring style and abilities, Gulak left the arena still picketing for his cause.

The No. 1 contender to the WWE Cruiserweight Championship, Austin Aries is set to face Neville at WWE Extreme Rules, but TJP – hoping to secure his own title opportunity – looked to finish what he started a few weeks ago and sideline A-Double with a knee injury.

Aries wasted little time going after TJP, keeping The Duke of Dab ducking outside the ring and trying to recalibrate strategies. With retribution on his mind, A-Double was relentless in his offense, but TJP targeted the injured knee of his opponent to capture momentum.

Showing his incredible resilience and keeping laser focus on his WWE Cruiserweight Championship opportunity at WWE Extreme Rules, A-Double continued to take the fight to TJP. Unfortunately for Aries, the intensity of the bout left the No. 1 contender to the WWE Cruiserweight Championship favoring his knee and potentially injuring his elbow and shoulder.

Throwing caution to the wind, Aries pressed forward with high-risk maneuvers. Refusing to let up himself, TJP applied his patented kneebar, nearly securing the win until A-Double applied The Last Chancery for the submission victory.

Immediately after the match, WWE Cruiserweight Champion Neville attacked, unleashing a brutal assault on Aries’ knee. Evening the odds, Gentleman Jack Gallagher – with William the Third in tow – made his way to the ring and fended off The King of the Cruiserweights. However, the damage may have been done, raising doubts about A-Double’s condition for WWE Extreme Rules. 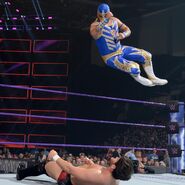 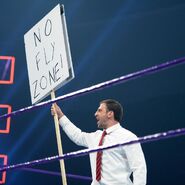 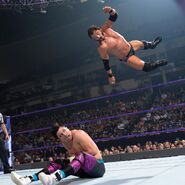 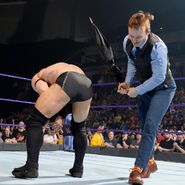 Retrieved from "https://prowrestling.fandom.com/wiki/205_Live_(May_16,_2017)?oldid=1270584"
Community content is available under CC-BY-SA unless otherwise noted.