Animosity between Isaiah “Swerve” Scott and Tony Nese was at a fever pitch even before the opening bell, as Nese recently cost “Swerve” a critical match in the NXT Cruiserweight Championship Tournament. And after Scott recently teamed up with The Brit-Am Brawlers to defeat Nese’s squad in a Six-Man Tag Team Match, the highflying Superstar was out to leave The Premiere Athlete in his dust in a singles bout.

Scott and Nese battled for more than 20 minutes in a bout that featured mat-wrestling, fisticuffs, acrobatics and some major league trash talk.

Nese landed the first big blow when he back suplexed Scott onto the ring apron, but “Swerve” recovered and landed a wicked series of right hands and a flying elbow drop from the second rope that left Nese dazed in the corner.

Scott then connected with a pair of vicious double stomps to pick up the 1-2-3 and continue his dominance against the former Cruiserweight Champion. 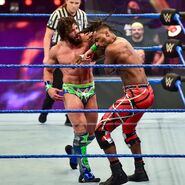 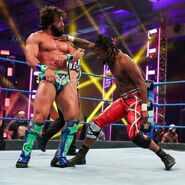 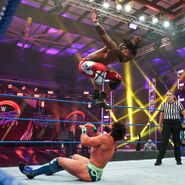 Retrieved from "https://prowrestling.fandom.com/wiki/205_Live_(June_26,_2020)?oldid=1711425"
Community content is available under CC-BY-SA unless otherwise noted.