The July 3, 2020 Edition of 205 Live was a Professional wrestling television show of the WWE which took place on July 3, 2020 at the WWE Performance Center in Orlando, Florida.

Isaiah “Swerve” Scott kicked off the Fourth of July weekend in style, pushing Matt Martel to his limit in a singles bout before pairing up with longtime rival Tony Nese and claiming a tag team victory over Ever-Rise.

In what was a brief singles match, “Swerve” blistered Martel’s chest with a series of stinging chops and appeared to have Martel on his heels. Unfortunately, Chase Parker suddenly pounced on Scott, resulting in the match being thrown out.

Then, Tony Nese caught everyone by surprise – especially Scott – when he dashed to the squared circle to ring to break up Ever-Rise’s attack and combine forces with “Swerve” in an impromptu tag team match against Parker & Martel!

And for a pair of Cruiserweights that have been at each other’s throats for weeks, Scott and Nese gelled fairly seamlessly, using timely tags and several tandem attacks to bring the fight to Ever-Rise.

And when Nese received a late tag, he entered the ring like a ball of fire before tattooing Parker with the Running Nese and making a tag to “Swerve,” who sailed through the air with a double stomp for a 1-2-3 that was punctuated by a post-match handshake between the victorious tandem, though Scott still seemed slightly suspicious of his unlikely partner.

This is not the same old Joaquin Wilde & Raul Mendoza, and nobody is more aware of their fact than their latest 205 Live opponents, Leon Ruff & Liam Gray.

Sporting a spiffy suit with his prized NXT Cruiserweight Title slung over his shoulder, a smirking Escobar calmly observed the action from ringside as Wilde & Mendoza showed off their newfound mean streak and essentially dominated Ruff & Gray with a combination of savage kicks and some high-impact suplexes.

The final blow? A vicious kick from Mendoza to Gray that resulted in Wilde scoring the pinfall. 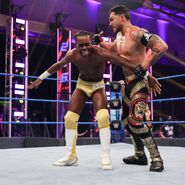 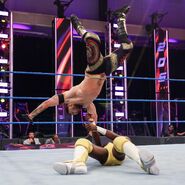 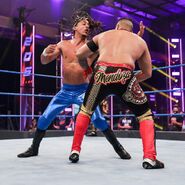 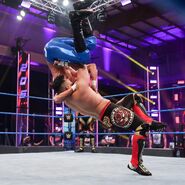 Retrieved from "https://prowrestling.fandom.com/wiki/205_Live_(July_3,_2020)?oldid=1711685"
Community content is available under CC-BY-SA unless otherwise noted.