After attacking WWE Cruiserweight Champion Neville last night on Raw, Ariya Daivari made it clear that he intended to show he was ready to challenge for the gold, and The Persian Lion was granted an opportunity to prove himself by facing The King of the Cruiserweights in a non-title contest on WWE 205 Live.

Before the match got underway, Neville's nemesis Akira Tozawa joined Vic Joseph and Corey Graves on commentary. Also, prior to the Cruiserweight Champion's arrival, Daivari gave a brief lesson about 1968 Olympic Gold Medalist Abdollah Movahed, declaring he would follow in his footsteps by defeating Neville.

Taking a psychological approach to Neville, Daivari repeatedly ducked out of the ring, forcing the WWE Cruiserweights to give chase. After a bit of back and forth, The Persian Lion struck and showed off his aggression, driving Neville into the barricade before executing a frog splash for a near fall. Ever resilient, Neville regained his composure and struck with a powerful superkick.

In control of the match, Neville stalked his opponent and struck with maximum impact. Dragging Daivari to the announce table to stare down Tozawa, Neville took his focus off his opponent as the official continued the 10-count on the outside. Staring down Tozawa, The King of the Cruiserweights was pushed into his nemesis by Daivari, ultimately allowing The Persian Lion to beat the 10-count and secure the win.

After the match, the tension between Neville and Tozawa mounted, nearly coming to blows as WWE officials got between them.

For weeks, The Brian Kendrick has been berating – and even attacking – Gentleman Jack Gallagher. The Man with a Plan believes Gallagher is nothing but a fraud and is insulted by his personality and demeanor inside the ring. Frustrated with the WWE Universe not accepting his beliefs about Gallagher, Kendrick escalated his attacks by transforming an image of the British Superstar into a clown.

The continued insults didn't sit well with Gallagher, and he made his way into the arena to confront Kendrick. Gallagher addressed how he recently was taking the high road by allowing The Man with a Plan to get his disdain out of his system. However, Gallagher decided that he would instead teach Kendrick a lesson. As Gentleman Jack charged the ring, Kendrick made his escape into the audience.

In the spirit of their “friendly” competition, TJP and Rich Swann chose tag tam partners – Tony Nese and Cedric Alexander, respectively – for a highly competitive battle on WWE 205 Live.

Swann and Nese kicked off the match, but just as he did on his way to the ring, The Premier Athlete wanted to make sure the WWE Universe admired his physique. Of course, Nese backed up his taunts by moving like a Cruiserweight and hitting like a heavyweight. Swann tagged in Alexander, and both Superstars began to dismantle Nese, displaying excellent teamwork.

The Premier Athlete managed to tag TJP, and The Duke of Dab and Alexander engaged in a fast-paced sequence that ended with Swann and Alexander delivering synchronized dives to the outside onto their opponents.

Despite the acrobatics, Nese and TJP recovered and relied on a combination of aggressiveness and teamwork to attack Alexander. Well-aware of Alexander's speed and resilience, both Nese and The Duke of Dab relied on high-octane strike and technical holds to keep Alexander on the defensive. TJP used the opportunity to taunt Swann, but when Alexander recovered, he tagged in Swann and TJP made it to Nese and the battle raged.

Swann and The Premier Athlete swapped momentum back and forth with incredible counters and jaw-dropping speed. Alexander and TJP re-entered the fray while Nese and Swann continued to duke it out. The Premier Athlete took Swann out of the match by slamming him into the announce table as TJP scored a near-fall.

Inside the ring, TJP and Cedric continued to display the high-octane competitiveness of the Cruiserweight division. However, as Alexander ascended the ropes while the official checked on TJP's condition, Nese pushed Alexander from the top, allowing TJP to score the pinfall.

After the match, a victorious TJP made sure Swann knew he once again claimed a victory in their “friendly” competition. 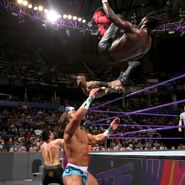 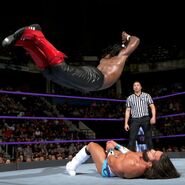 Retrieved from "https://prowrestling.fandom.com/wiki/205_Live_(July_25,_2017)?oldid=1551113"
Community content is available under CC-BY-SA unless otherwise noted.