July 25, 2017
The July 18, 2017 Edition of 205 Live is a Professional wrestling television show of the WWE, which took place at the Legacy Arena at The Birmingham-Jefferson Convention Complex in Birmingham, Alabama on July 18, 2017.

Set to square off against a local competitor, The Brian Kendrick was caught off-guard when he learned his opponent, Devin Bennett, was from Gentleman Jack Gallagher's hometown of Manchester, England. The Man with a Plan took the opportunity to berate Gallagher in front of Bennett, once again expressing his disdain for Gentleman Jack's personality and calling him a clown. When asked if he thought he could defeat Kendrick, Bennett answered affirmatively, and the match got underway.

Kendrick wasted no time attacking Bennett and unleashing a ruthless offense, asking his opponent if he was also a clown. Backing Bennett into the corner of the ring, The Man with a Plan continued to scream at his opponent. The Manchester native responded to Kendrick with a slap that only incensed Kendrick, who delivered a huge boot to the face before locking Bennett in the Captain's Hook for the win.

During the battle between Akira Tozawa and Ariya Daivari on Raw, Titus O’Neil forfeited the match on behalf of Tozawa, who was attempting to fight through the immense pain of a shoulder injury. Irate over O’Neil's decision and intent on proving he was still capable of competing, Tozawa demanded a rematch against The Persian Lion.

Before the bout got underway, Daivari dedicated the match to Iranian 1956 Melbourne Olympic Gold Medalist Emam-Ali Habibi, declaring he would follow in Habibi's footsteps as a great Iranian champion. Tozawa then made his way to the ring with a giant target – a heavily taped shoulder.

With the WWE Universe fueling him, Tozawa struck with determination, taking down Daivari with a flurry of strikes and counters all the while protecting his shoulder. However, after escaping a high-risk maneuver, Daivari found an opening to attack his opponent's injury. Advancing aggressively, The Persian Lion focused his attacks on Tozawa's shoulder, inflicting as much pain as he could.

Tozawa battled through the agony, fending off a potentially devastating attack with his arm caught in the steel steps. Throwing caution to the wind, Tozawa charged through the ropes, taking down Daivari on the outside. However, it may not have been worth the risk, as Daivari continued to go after the shoulder and quell any signs of offense from Tozawa.

After Daivari came within an eyelash of earning the win with a series of near-falls, the Japanese Superstar managed to counter with a pinfall of his own to secure the victory. Despite the loss, Daivari launched Tozawa into the ring post to inflict maximum damage.

With two chances to prove their respective in-ring abilities and philosophies are superior, Mustafa Ali and Drew Gulak saw their rivalry reach the pinnacle in a 2-out-of-3 Falls Match. Gulak hoped to use his technical prowess to permanently ground his nemesis, but Ali was poised to put his versatility on display in the high-stakes contest.

After four battles with each Superstar claiming two victories, the only way to definitively settle their rivalry was in WWE 205 Live's first-ever 2-out-of-3 Falls Match. As the contest got underway, both competitors grappled with neither taking a clear advantage. However, Ali used his agility to begin countering Gulak's advances and rolled him up to secure a pinfall.

Initially irate, Gulak composed himself, re-entered the ring and attacked with poised aggression. Back on the attack, Gulak channeled his anger and frustration into merciless strikes, shouting at Ali as he unleashed a flurry of kicks in the corner.

As the battle spilled back to the outside, Ali executed a Frakensteiner off the barricade, but landed hard. Back in the ring, Gulak pulled his opponent off the top rope and trapped Ali in a Dragon Sleeper for a victory that tied the match at one fall apiece.

With the third fall underway, Gulak refused to release the Dragon Sleeper and transitioned into a methodical dismantling of his rival. Despite a brief rally by Ali, Gulak countered another high-risk move, slamming Ali to the mat for a near-fall. Displaying his incredible resilience, Ali found the energy to execute an inverted hurricanrana, followed up by an incredible high-flying takedown on the outside.

As both Superstars showed the effects of the match, the two exchanged blows and an incredible series of specialty attacks that left the WWE Universe on the edge of their seats.

With all his options exhausted, Gulak ascended to the top rope – once again defying his own beliefs. Ali seized the opportunity to strike after Gulak hesitated, taking his nemesis down with a hurricanrana and finally securing the victory with an incredible Inverted 450 Splash. 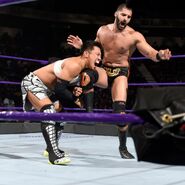 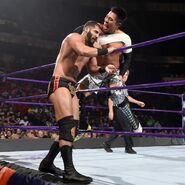 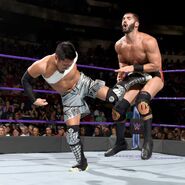 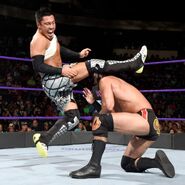 Retrieved from "https://prowrestling.fandom.com/wiki/205_Live_(July_18,_2017)?oldid=1551111"
Community content is available under CC-BY-SA unless otherwise noted.