Before the match got underway, a courier delivered flowers to Noam Dar's girlfriend Alicia Fox at ringside. Distracted by the gesture, Fox didn't see that the flowers weren't from The Scottish Supernova and Dar was visibly annoyed by their arrival.

As the battle raged on and Dar and Dorado exchanged momentum, Rich Swann watched the action from a monitor in the locker room – seemingly delighted by the flower delivery. Dorado nearly captured victory with a jaw-dropping stunner in the center of the ring. However, The Scottish Supernova recovered and delivered an impactful running kick to defeated The Golden Lynx.

After the match, Dar took credit for the flowers delivered to his leading lady and the couple left the ring on cloud nine.

Austin Aries welcomed Akira Tozawa to the ring in order to discuss the Japanese Superstar's intensifying rivalry with The Brian Kendrick. Tozawa explained that despite Kendrick's offers of mentorship, The Stamina Monster wants to make it on his own. When asked about his feelings in regard to the lessons Kendrick hopes to teach, Tozawa responded by pumping himself up and getting ready for a fight.

This prompted Kendrick to enter the arena, but not the ring to confront Tozawa. Instead, The Man with a Plan asked his prospective pupil a series of questions – the answers to which Kendrick interrupted. Infuriated, Tozawa yelled at his nemesis in Japanese and demanded a fight. However, The Man with a Plan turned the incident into another lesson, telling Tozawa he needs to finish his interviews and speak English when talking to Kendrick.

Early in the contest, Nese managed to take control on behalf of his team. However, with so many talented and high-flying Superstars in the match, it didn't take long for chaos to reign supreme. As the action spilled outside the ring, Mustafa Ali took down Daivari and Gulak, but Nese took advantage of the bedlam and began to dismantle Perkins.

Gulak, Nese and Daivari took turns attacking Perkins, but the inaugural Cruiserweight Champion remained resilient, leading his team back onto the contest. Ali lead the charge, mounting an impressive effort and nearly claiming victory. Unfortunately, for Ali, Perkins and Alexander, their opponents remained shrewd and attacked with such vigor that Nese managed to take down Perkins for the win.

Sitting atop the Cruiserweight division as both champion and king, Neville issued a self-adulating and aggressive State of 205 Live address less than a week before his battle with Gentleman Jack Gallagher at WWE Fastlane. Neville explained that the Cruiserweight division was in chaos before he arrived and though he believes he corrected the course, he feels the rest of the Cruiserweights were ungrateful for his efforts. Neville continued that Gallagher was not on his level and that he was prove it at WWE Fastlane.

Gallagher had enough of Neville's tirade and made his way to the ring, the two exchanged barbs and Gallagher ignored the champion's demands to leave. The confrontation soon degraded into an all-out brawl with Gallagher proving he was ready to face his WWE Fastlane challenger.

Will Gentleman Jack Gallagher knock Neville from his throne and capture the WWE Cruiserweight Championship? Find out this Sunday at 8/7 C, exclusively on WWE Network. 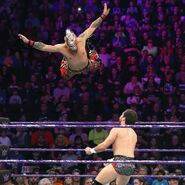 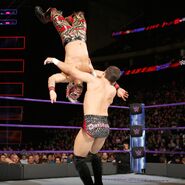 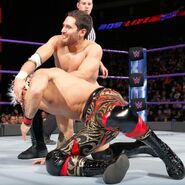 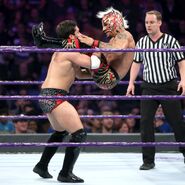 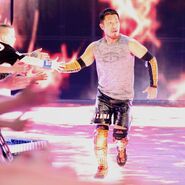 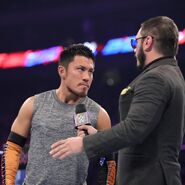 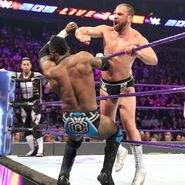 Retrieved from "https://prowrestling.fandom.com/wiki/205_Live_(February_28,_2017)?oldid=1551089"
Community content is available under CC-BY-SA unless otherwise noted.