With a pre-match good luck kiss from his girlfriend Alicia Fox, Cedric Alexander was poised to prove himself superior against Noam Dar – the youngest member of the WWE Cruiserweight division. Dar, however, was relentless in his offense, targeting his opponent's arm to maintain an advantage throughout the contest. Surviving a late flurry of offense, The Scottish Supernova's strategy proved righteous, tossing his opponent into the ringpost before securing the win.

After the contest, Dar added insult to injury by dedicating the match to Fox – much to the dismay of Alexander.

On the inaugural episode of WWE 205 Live, Jack Gallagher made his Cruiserweight division debut with an impressive victory against Ariya Daivari. While “The Extraordinary Gentleman” would again best Daivari on Raw, his opponent was determined to make sure it didn't happen a third time. The ruthless competitor attacked his adversary's knee in a brutal post-match assault that left the British Superstar reeling.

As expected, Daivari targeted Gallagher's bandaged knee, effectively neutralizing much of his opponent's unorthodox in-ring style. However, Gallagher displayed the heart of a fighter, battling through the pain and making Daivari earn every advantage. Unfortunately for “The Extraordinary Gentleman,” Daivari's tactics paid off and he escaped a third defeated pinning Gallagher following a high-flying maneuver.

As TJ Perkins and Austin Aries exchanged barbs on commentary at ringside, Swann and Kendrick wasted no time getting into the action in their high-stakes rematch. Neither Cruiserweight maintained an edge in the contest, giving each other their absolute best as they battled back and forth.

The champion tried to rely on high-impact maneuvers as Kendrick applied The Captain’s Hook multiple times, unable to make Swann submit. After battling outside the ring, Swann managed to throw his opponent into Perkins. Distracted by his nemesis, Kendrick made his way back into the ring only to be met by a spinning heel kick allowing The Outlandish one to retain the championship.

After the contest, a brawl between Kendrick and Perkins broke out that the champion interjected himself into. As the chaos subsided, Kendrick stood tall, having taken out both Swann and Perkins. 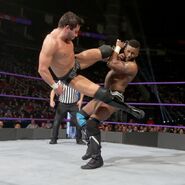 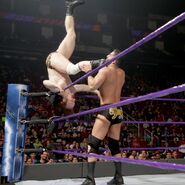 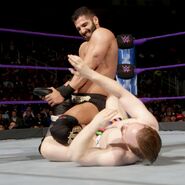 Retrieved from "https://prowrestling.fandom.com/wiki/205_Live_(December_6,_2016)?oldid=1551080"
Community content is available under CC-BY-SA unless otherwise noted.