There is certainly no love lost between The Brian Kendrick and Drew Gulak, and that was evident as the former allies faced off on WWE 205 Live. In their corners were their respective allies, Akira Tozawa and Gentleman Jack Gallagher, as Gulak landed the first big blow when he clobbered The Man with a Plan with a powerful clothesline.

Struggling to counter the masterful manipulation of his limbs by Gulak, Kendrick eventually channeled his disdain for The Philadelphia Stretcher and applied his own submission before an impactful suplex and sequence of furious strikes. As the battle spilled to the outside, Tozawa made sure not to get involved, but as soon as Kendrick tossed Gulak back into the ring, the British Superstar tossed The Stamina Monster into the ring post.

However, Kendrick executed Sliced Bread No. 2 and nearly secured the victory before Gallagher entered and attacked The Man With a Plan. With the official forced to call off the match, Gallagher and Gulak continued to assault Kendrick and then Tozawa, leaving them decimated inside the ring.

After making a shocking return to WWE 205 Live last week and declaring his respect for Hideo Itami, Ariya Daivari returned to action against Clay Roberts. Daivari wasted no time driving his opponent into the corner and unloading with furious strikes. Although Roberts attempted to fight back, it only enraged Daivari.

With Hideo Itami looking on from the locker room, The Persian Lion continued to destroy his opponent, devastating him with two clotheslines and feigning a pinfall. Daivari then unleashed a series of three clotheslines that knocked Roberts out, forcing the official to call the match in Daivari's favor.

Looking to put an end to The Lucha House Party once and for all, Maria Kanellis requested that her husband, Mike Kanellis, and TJP battle the luchadores in one of the masked Superstars’ specialties – a Tornado Tag Team Match. With Gran Metalik taking part in a WWE Live Event in Chile, Kalisto and Lince Dorado faced off against The Cruisergreat and Kanellis.

Of course, under Tornado Tag Team Match rules, all four competitors were in the ring at the same time, and chaos immediately ensued. The Lucha House Party immediately showed why they specialize in this match, taking an early advantage by isolating their opponents and driving them from the ring. With the WWE Universe firmly in their corner, Kalisto and Dorado continued to assert dominance against their rivals, much to Maria's chagrin.

With her team struggling to mount an offense, Maria distracted Kalisto by holding up one of the piñatas, allowing TJP to knock the former Cruiserweight Champion off the top rope. The First Lady destroyed the piñata as Kanellis and TJP took control, further destroying the piñatas and showing off the masks previously stolen from The Lucha House Party.

Kanellis and TJP maintained control for some time, as The Cruisergreat locked Kalisto into a unique submission before transitioning his opponent into his patented Kneebar, but Kalisto refused to quit, even in the face of Maria's shrieking. After breaking free, Kalisto fended off Kanellis and TJP until Dorado regained his bearings and took down both opponents.

The Golden Lynx executed three moonsaults at Kanellis’ expense, and Dorado then called for Kalisto to grab the bag they brought to ringside. Kalisto opened the bag and dumped a bunch of mini-piñatas into the middle of the ring. Despite suffering a double suplex onto the party favors, TJP recovered and battled back, taking down Kalisto and calling for Penelope the piñata to be used as a weapon. However, Kalisto countered, and when Maria tried to steal the coveted Penelope, Kalisto tossed it into her face, and she fell on top of her husband outside the ring.

The move gave Kalisto the opening to hit Salida del Sol, and Dorado followed up with a magnificent Shooting Star Press for the victory. After the match, The Lucha House Party celebrated the win and recovered their stolen masks.

WWE 205 Live General Manager Drake Maverick announced on Twitter that Cedric Alexander has earned an opportunity to challenge Buddy Murphy after getting back on track with an impressive victory against Lio Rush and pinning the WWE Cruiserweight Champion in tag team action.

Although no date has been set for the showdown, The Soul of WWE 205 Live will have the opportunity to send a message to Murphy next week when he faces the titleholder's training partner, Tony Nese, in singles competition. 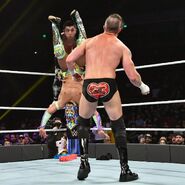 Retrieved from "https://prowrestling.fandom.com/wiki/205_Live_(December_5,_2018)?oldid=1551078"
Community content is available under CC-BY-SA unless otherwise noted.