Ariya Daivari had one goal in mind on WWE 205 Live – to get back on track after receiving a “thorough thrashing” from Jack Gallagher on Raw last week. The Persian Lion faced a daunting challenge in the form of a rematch against Lucha Libre sensation Lince Dorado.

The Golden Lynx relied on his incredible agility to maintain a strong offense against Daivari. However, The Persian Lion relied on a more physical style to counter the luchador's speed. Displaying his resilience, Daivari weathered a flurry of fast-paced maneuvers to counter a move on the top rope and execute a frog splash for the win.

After the match, Daivari made his animosity towards Jack Gallagher known, claiming that the British gentleman was not extraordinary, but was indeed a scoundrel.

Fresh off a victory against Noam Dar on Raw, Cedric Alexander set his sights on building momentum on WWE 205 Live in a bout against Drew Gulak.

Everything was going smooth as Alexander and Gulak engaged in a competitive match until Alicia Fox – at ringside supporting her boyfriend, Alexander – suffered an injury to her ankle after Gulak pushed Alexander into her following a jaw dropping spill to the outside.

Before Alexander could leave the ring to help his girlfriend, Dar raced to her side and helped Alicia to the locker room. Seizing the opportunity to capitalize on his opponent being distracted, Gulak nearly stole a victory. However, Alexander recovered and managed to pick up the win before racing to the back to tend to Fox.

Neville made a shocking return at Roadblock: End of the Line and dismantled Cruiserweight Champion Rich Swann and TJ Perkins, putting the entire Cruiserweight division on notice. Proclaiming himself the king of cruiserweights, Neville again attacked Swann and Perkins on Raw, this time with the support of The Brian Kendrick. This of course led to the tag team match on WWE 205 Live, a perfect opportunity for Neville to show off his abilities alongside the current and two former Cruiserweight Champions.

The Man that Gravity Forgot wasted no time displaying his new and ruthless in-ring style at the expense of the Cruiserweight Champion. However, TJ Perkins managed to change the tide of the match against both Neville and Kendrick.

Although Neville and Kendrick dominated early in the contest, the Cruiserweight Champion and TJP kept the WWE Universe on the edge of their seats with a competitive battle. Unfortunately for Swann and Perkins, it was not enough and Neville's unbridled aggression proved to be the deciding factor in the match, finishing off Perkins with a Red Arrow. 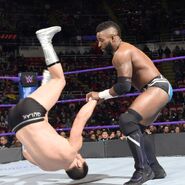 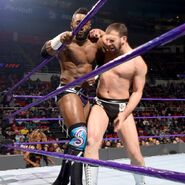 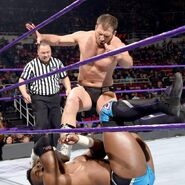 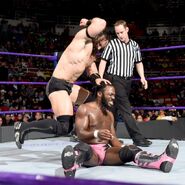 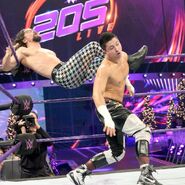 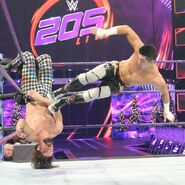 Retrieved from "https://prowrestling.fandom.com/wiki/205_Live_(December_20,_2016)?oldid=1551075"
Community content is available under CC-BY-SA unless otherwise noted.