December 20, 2016
The December 13, 2016 Edition of 205 Live is a Professional wrestling television show of the WWE, which took place at the Wells Fargo Center in Philadelphia, Pennsylvania on December 12, 2016.

In his first two matches, Jack Gallagher earned impressive victories against Ariya Daivari. However, following their second match, Daivari attacked “The Extraordinary Gentleman’s” knee, ultimately leading to a victory in their third confrontation. On Raw, Gallagher defended his honor, interfering in Daivari's match with Lince Dorado. On WWE 205 Live, Gallagher was determined to regain his early momentum by defeateding Drew Gulak.

Seemingly back at full strength, “The Extraordinary Gentleman” relied on his unorthodox in-ring style to maintain an advantage against his opponent – in a showdown that included an incredible sequence of multiple roll-ups and reversals by both Superstars. After being tied in a knot and taunted by Gallagher, Gulak unleashed a furious offense, leveraging his speed and strength in an attempt to earn a victory.

Unfortunately for Gulak, a well-timed headbutt followed by a running dropkick was enough for Gallagher to pick up the win.

Although the Cruiserweights compete on Raw, the true home of the division is WWE 205 Live. The showcase for Superstars weighing 205 pounds and under invites fast-paced, high-octane competition, and Mustafa Ali and Lince Dorado answered the call in their WWE 205 Live debuts.

Prior to the contest, both Superstars competed in the Cruiserweight Classic, and while Dorado has competed on Raw, Ali felt his WWE 205 Live debut was the perfect place to show the WWE Universe what he is all about. As soon as the opening bell sounded, Dorado and Ali immediately displayed their respective agility and in-ring abilities. The WWE Universe watched in awe as both Superstars moved and executed maneuvers with lightning speed. However, as the action spilled the outside, a moonsault by Dorado left both competitors stunned.

Unable to answer the official's 10-count, the match resulted in a double count-out. After the match, Ali attacked Dorado, but The Golden Lynx responded and kicked his opponent out of the ring.

At Roadblock: End of the Line this Sunday on WWE Network, “The Outlandish” Rich Swann will defend the Cruiserweight Championship in a Triple Threat match against TJ Perkins and The Brian Kendrick. Both of Swann's opponents are former Cruiserweight Champions determined to reclaim the title and as a result, Swann faces his greatest challenge to date.

However, on WWE 205 Live, Swann faced one of his opponents – and his friend – Perkins in a grueling struggle for momentum heading into Roadblock: End of the Line. After losing to Kendrick on Raw, Perkins was determined to make a powerful statement before the Triple Threat Match.

With Kendrick on commentary, Perkins and Swann relied on their respective technical ability as well as their high-flying agility. Striking with surgical precision, Perkins enjoyed a strong advantage throughout the contest, targeting Swann's knee. Although the champion displayed his resilience, Perkins’ strategy paid dividends as he forced the champion to tap out.

Following the contest, Kendrick made his way to the ring to congratulate Perkins. However, Perkins responded with a superkick, followed by a warning for Swann that the inaugural Cruiserweight Champion is ready for Roadblock: End of the Line. 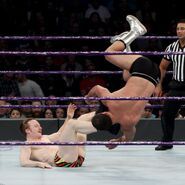 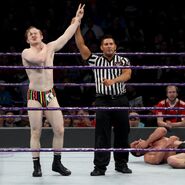 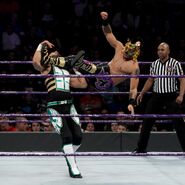 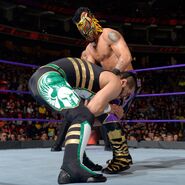 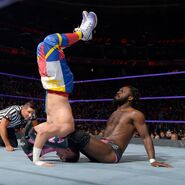 Retrieved from "https://prowrestling.fandom.com/wiki/205_Live_(December_13,_2016)?oldid=1551072"
Community content is available under CC-BY-SA unless otherwise noted.