Tehuti Miles spent his afternoon crowing about how he wanted some serious competition on 205 Live, specifically a veteran that could bring the best out of him. The WWE Performance Center standout may have got more than he bargained for when former Cruiserweight Champion The Brian Kendrick made his jaw-dropping return to the purple brand!

Kendrick’s first move upon stepping back into the squared circle? Drawing the ire of Tehuti by booting his fanny pack out of the ring.

With Kendrick perhaps shaking off some ring rush, Miles took the upper hand with a some arm drags and haymakers and a vicious Irish whip into the turnbuckles, all while making sure to trash talk his opponent. Miles, however, took his taunting too far when he crouched over a downed Kendrick to continue his mockery, only to be rolled up for the 1-2-3 by The Man With a Plan.

When Kendrick asked for a handshake after the match, Miles hesitated for a moment before begrudgingly accepting. Kendrick complimented his opponent on his potential before telling him, “Drop the ego, and you’ll be a star.”

Tony Nese made jaws drop when he savagely attacked Jake Atlas after losing to the upstart last week on 205 Live, and the former Cruiserweight Champion was anxious to get back in the win column tonight against local competitor Liam Gray.

Nese did exactly that, taking the advantage with a running elbow right at the opening bell and demanding that Gray tell him why he deserves to be on his show.

Nese nearly broke Gray in half with a German suplex into the bottom turnbuckle and tattooed his foe with Running Nese for the victory.

If the main event of 205 Live is any indication, Oney Lorcan & Danny Burch likely disagree with Ever-Rise’s claim of being the “greatest tag team ever on 205 Live.”

After a brief feeling out process, Burch landed the first big blow by leveling Chase Parker with a dropkick, but Burch was ambushed by Matt Martel after Martel blindly tagged himself into the bout.

Ever-Rise subsequently kept Burch isolated with a precision attack and some timely tags, but when Lorcan finally got into the match, he nailed Parker with an elbow to the jaw and turned Martel’s chest red with a series of stinging chops.

Ever-Rise nearly stole the victory when Parker attempted to pin Lorcan while Martel held The Boston Brawler’s leg, but the referee noticed and halted his count just before slapping the mat for three.

As 205 Live’s resident conspiracy theorists argued with the official, Lorcan tagged in Burch, who hit the ring like a ball of fire and locked Parker in a submission hold to force a nearly immediate tapout. 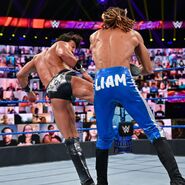 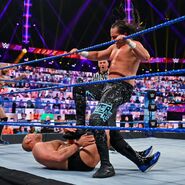 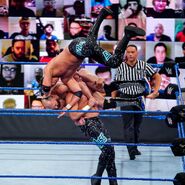 Retrieved from "https://prowrestling.fandom.com/wiki/205_Live_(August_28,_2020)?oldid=1733987"
Community content is available under CC-BY-SA unless otherwise noted.