After being battered by Undisputed ERA nine nights ago on NXT, Drake Maverick was looking to take out his rage on Tehuti Miles, and it was evident he had plenty of it from the start.

It wasn’t easy, as Maverick had to deal with constant disrespect from Miles and an early barrage of right hands to the face.

Miles let the former 205 Live General Manager know that he wasn’t taking him seriously by repeatedly taking mid-match breaks to comb his hair, but that only seemed to stoke the competitive fire within Maverick, who viciously dropkicked his foe off of the ring apron while Tehuti was flaunting his looks.

Miles briefly regained the upper hand with a series of stinging haymakers, but Maverick suddenly blistered his opponent with a clothesline, bulldog and running senton in rapid-fire succession before following up with a top-rope elbow. With Miles in a daze from the onslaught, Maverick delivered a picture-perfect Underdog to claim the first purple brand victory inside WWE’s jaw-dropping ThunderDome.

Prior to stepping into the ring to take on Jake Atlas, Tony Nese looked right into the camera and openly questioned why Isaiah “Swerve” Scott wouldn’t want The Premier Athlete watching his back. Nevertheless, the former Cruiserweight Champion still seemed to be in good spirits as he bounded to the squared circle to tangle with Atlas.

A savage kick to the face by Nese resulted in a near-fall, but Atlas fired back with a stinging forearm to the face after being whipped into the turnbuckles.

Atlas scored a narrow near-fall of his own after sailing through the air and slamming Nese with a springboard blockbuster, though The Premier Athlete brought the brutality to another level with yet another boot to the dome prior to landing a second-rope moonsault for another long two-count.

After Drew Gulak complimented Nese for a stiff right hand to the jaw from the commentary table, Nese took the opportunity to thank The Philadelphia Stretcher, but Atlas capitalized by rolling up Nese for the surprise win.

Nese responded by ruthlessly attacking Atlas after the bout, and he concluded the assault by tattooing his newfound enemy with the Running Nese. After admiring his handiwork, Nese removed the 205 Live table panel, pointed to the logo and told the announcers that the 205 Live roster is “garbage without Tony Nese” before storming back up the ramp. 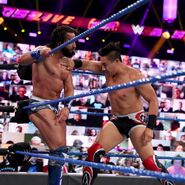 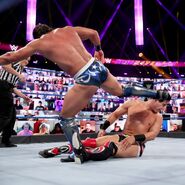 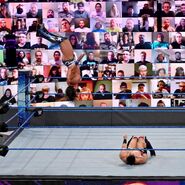 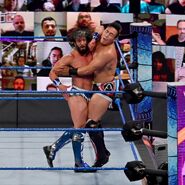 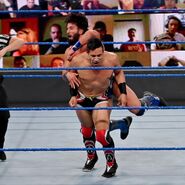 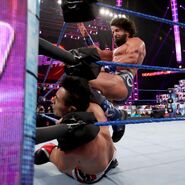 Retrieved from "https://prowrestling.fandom.com/wiki/205_Live_(August_21,_2020)?oldid=1725298"
Community content is available under CC-BY-SA unless otherwise noted.