Two rivalries converged on WWE 205 Live as Rich Swann joined forced with Akira Tozawa to battle their respective nemeses Noam Dar and The Brian Kendrick. As Tozawa continues to teach Kendrick lessons of his own, the rivalry between Swann and Dar intensified last week when Swann – revealing he was sending gifts to Alicia Fox – caught The Scottish Supernova lying to The Foxy Floridian about the origin of the favors.

Before the opening bell sounded, Kendrick and Dar attempted to attack their opponents to gain an advantage. However, Swann and Tozawa turned the tables and removed Kendrick and Dar from the ring, adding an exclamation point with a double dive to the outside. Back in the ring moments later, the match really began.

Although Swann enjoyed an early advantage, Dar and Kendrick displayed fluid and ruthless teamwork, dismantling the former WWE Cruiserweight Champion. The Man with a Plan masterfully prevented Swann from tagging in Tozawa with uncanny veteran awareness, but once The Stamina Monster made it into the ring, he displayed an incredibly agile offense that left his opponents desperate for relief.

Attempting to aid his partner, Kendrick grabbed Tozawa as Dar charged forward. Unfortunately for Kendrick, Tozawa ducked and The Man with a Plan was taken down by The Scottish Supernova, allowing Tozawa to execute a Shining Wizard for the win.

After the match, Tozawa took the opportunity to bestow a new lesson on The Brian Kendrick: Always choose a partner wisely.

Just before the opening bell rang for the matchup between Mustafa Ali and Tony Nese, Drew Gulak made his way to ringside to join Corey Graves and Tom Phillips on commentary. There, he proceeded to explain his campaign to stop high-flying maneuvers and encourage a more competitive and safe atmosphere. Last week, Gulak's protest of high-flying distracted Ali and allowed Ariya Daivari to secure victory.

As Gulak pontificated his views on what the Cruiserweight division should be, Ali and Nese engaged in battle of agility, as both Superstars utilized their fast-paced arsenals. However, The Premier Athlete outclasses Ali in one area – pure strength. Using his power effectively, Nese took control of the match, much to the delight of his friend, Gulak.

Displaying his resilience, Ali battled back and relied on quick offensive strikes and high-risk moves to seize the momentum. Seething at what was transpiring in the ring, Gulak pulled Nese to the outside before Ali could execute his patented Inverted 450 Splash.

Although Ali would lose by disqualification, he flew in the face of Gulak's anti-high-flying campaign by leaping off the top rope to the outside and flattening him.

Slated to battle Austin Aries at WWE Payback, WWE Cruiserweight Champion Neville faced the unorthodox challenge of Gentleman Jack Gallagher on WWE 205 Live. Having squared off before, The King of the Cruiserweights and Gallagher are familiar with one another, a point highlighted by Neville tossing William the Third – the English Superstar's trusty umbrella – up the entrance ramp.

Although Gallagher defended his umbrella's honor with a dive through the ropes, the Cruiserweight Champion took control back inside the ring, displaying his unbridled ruthlessness. The King of the Cruiserweights took his time decimating his opponent and denying any offense that Gallagher could muster.

Never one to back down, Gallagher fought back with the WWE Universe behind him and put Neville on the defensive for the first time in the contest. The momentum shifted back and forth until Gallagher used his head as a battering ram to Neville's sternum and nearly claimed victory.

Gallagher hoped to derail the Cruiserweight Champion with a high-risk move from the top, but Neville wisely struck his opponent in the face, regaining control of the match. With his mercilessness taking over, Neville unleashed a flurry of kicks to the back of Gallagher's neck in the corner of the ring before claiming victory with The Rings of Saturn.

Determined to send Austin Aries a message, the Cruiserweight Champion attacked his vanquished opponent, moving to once again apply the Rings of Saturn. Fortunately for Gentleman Jack, Aries attacked Neville, executing a Discus Five-arm and applying the Last Chancery to The King of the Cruiserweights.

Will Austin Aries finally dethrone Neville and claim the WWE Cruiserweight Championship? Find out this Sunday at WWE Payback, streaming live on the award-winning WWE Network. 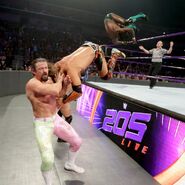 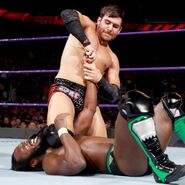 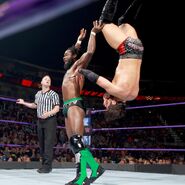 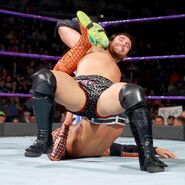 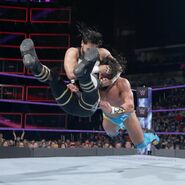 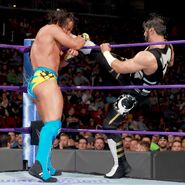 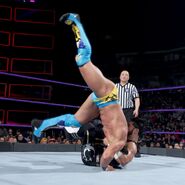 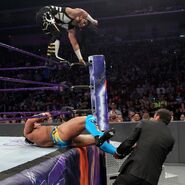 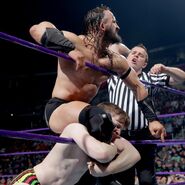 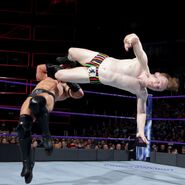 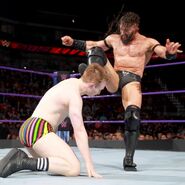 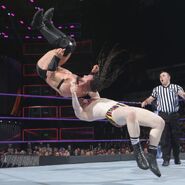 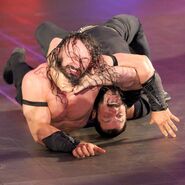 Retrieved from "https://prowrestling.fandom.com/wiki/205_Live_(April_25,_2017)?oldid=1551056"
Community content is available under CC-BY-SA unless otherwise noted.