The 2019–20 coronavirus pandemic is an ongoing pandemic of coronavirus disease 2019 (COVID-19) caused by severe acute respiratory syndrome coronavirus 2 (SARS-CoV-2). The outbreak was first identified in Wuhan, Hubei, China, in December 2019 and recognised as a pandemic by the World Health Organization (WHO) on 11 March 2020.

Due to the pandemic, many changes had to be made to professional wrestling events. A wide variety of shows were forced to either completely cancel, postpone, or make different accommodations.

All Elite Wrestling were forced to move many of their events as a result of the pandemic and to comply with health standards. Tony Khan also announced to the roster that they were allowed to miss events if they felt the need and that they wouldn't be punished or missing the event.[1] They announced on March 12, 2020 that the locations of their March 18 and March 25 editions of AEW Dynamite had to be rescheduled.[2]

The following day they also announced the rescheduling of the April 1 and April 8 edition of Dynamite.[3]

On March 15, 2020 CMLL announced that all shows beginning with the planned March 14 episode of Sabados de Coliseo will be postponed until March 21, 2020.[4]

Dramatic Dream Team, as well as their sister promotion Tokyo Joshi Pro, began hosting events that took place in empty arenas at the end of February and beginning of March 2020.

Beginning on March 16, 2020 - IWRG began showing empty arena matches. This was a decision made by the company instead of coming from a commission or government body.[5]

On March 16, 2020 - the National Wrestling Alliance announced that they have cancelled live performancess until June, including the NWA Crockett Cup pay-per-view and the television tapings of NWA Powerrr. The March 17, 2020 episode of Powerrr was postponed so that it could be re-edited and NWA put up the NWA 70th Anniversary Show in its' place.

On March 23, NJPW announced the cancellation of two events - Sakura Genesis and the April 11th Road to Dontaku show. [8]

On March 31, NJPW announced additional cancellations of their events.[9]

On May 6, the cancellation of the Best of the Super Junior 27 tour was anounced, which meant that there would be no events until after June 6.[11]

On May 1, Ring of Honor announced the cancellation of all of their scheduled June events. [15]

After Stardom No People Gate, which took place in an empty arena, Stardom went on hiatus until March 22, 2020. Stardom's first show in front of a crowd took place on March 24, 2020 with the Stardom Cinderella Tournament 2020.

World Wrestling Entertainment as a result of the pandemic began to move their shows from arenas where they were originally scheduled to the WWE Performance Center. The first instance of this began with the March 13, 2020 edition of WWE Smackdown.

On March 16, WWE announced that WrestleMania 36 would be held at the WWE Performance Center in Orlando with only "essential personnel" in attendance, as with all other WWE weekly programs during this crisis.[16]. In addition, they announced that the WWE Hall of Fame ceremony would be postponed, as well as NXT Takeover: Tampa Bay. The remainder of the WrestleMania events were cancelled.

After weeks of WWE's television programs being pre-taped at the WWE Performance Center, Monday Night Raw, NXT, and WWE Smackdown were allowed to begin resuming live starting with the April 13 edition of RAW. This was allowed to take place even though Florida had a stay-at home order until April 30th because WWE was deemed an essential business by the Florida governor.[18]

Additional releases continued with WWE releasing Cain Velasquez on April 28[21] and Curtis Axel on April 30.[22]. Gerald Brisco also confirmed that he was part of the employees who had been furloughed. [23]

Vince McMahon as owner and operator of the XFL was also affected by the coronavirus pandemic. After five weeks of operation, the league announced that its season would close on March 8, 2020 because of growing COVID-19 pandemic concerns and social distancing mandates.[24] On April 10, the league suspended day-to-day operations and laid off its employees, it filed for bankruptcy three days later and put itself up for sale.[25]

In response to the global pandemic, many wrestling companies and independent manufacturers began to create face masks, as well as other merchandise. 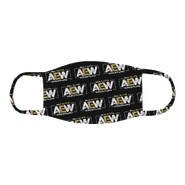 AEW Logo Face Mask
Add a photo to this gallery

Retrieved from "https://prowrestling.fandom.com/wiki/2019–20_coronavirus_pandemic?oldid=1687832"
Community content is available under CC-BY-SA unless otherwise noted.