12 Rounds is a 2009 action film directed by Renny Harlin and produced by WWE Studios. It is John Cena's second film, his first being The Marine. The cast is led by Professional wrestler John Cena, alongside Steve Harris, Gonzalo Menendez, Aidan Gillen, Brian J. White, Ashley Scott, and Taylor Cole. The film was released on March 27, 2009 in theaters.

The film opens in an FBI operation to catch a nearly untraceable, internationally known terrorist, named Miles Jackson (Aidan Gillen). New Orleans Police Officer Danny Fisher (John Cena) and his partner bump into the getaway car of Jackson and his Fiancée (Taylor Cole). After Danny chases the car on foot, he manages to stop them. Jackson's girlfriend is, however, killed, when she is struck down by a truck after trying to make a run for it. A year later, and Danny and his partner have been promoted to detectives. Jackson has escaped prison and planned his revenge on Fisher in a game he calls "12 Rounds". He kidnaps Fisher's girlfriend Molly Porter (Ashley Scott) and forces him into a series of dangerous games, carefully plotted throughout the streets of New Orleans. Fisher struggles to keep focus while the obvious ticking clocks and crude consequences that accompany each one of the "rounds" do their best to derail him from rescuing the love of his life before it's too late.

The score of 12 Rounds was composed by Trevor Rabin, who had previously worked with director Renny Harlin on Deep Blue Sea and Exorcist: The Beginning. He recorded his score with the Hollywood Studio Symphony at the Eastwood Scoring Stage at Warner Bros. Studios.

12 Rounds has received generally negative reviews from critics. Some critics have noted the film's similarities to the 1995 movie Die Hard with a Vengeance. The film ranking website Rotten Tomatoes reported that only 30% of critics had given the film positive reviews, based upon a sample of 61. At Metacritic, which assigns a normalized rating out of 100 to reviews from mainstream critics, the film has received an average score of 37, based on 11 reviews.

The DVD is a one-disc set that includes: 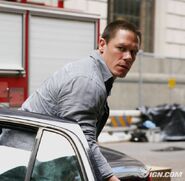 Retrieved from "https://prowrestling.fandom.com/wiki/12_Rounds?oldid=1551020"
Community content is available under CC-BY-SA unless otherwise noted.